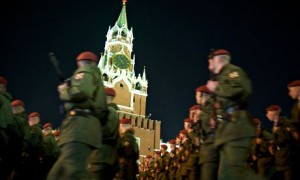 In the first parade organised by the Federation of Independent Trade Unions since the collapse of the Soviet Union, more than 100,000 people have marched in central Moscow.  The International Monetary Fund has slashed its growth forecast for the Russian economy (which it says is already in recession) for 2014 and 2015 to 0.2 % and 1%.  Bill Browder, whose investment firm was represented by Sergei Magnitsky, the lawyer who died in pre-trial detention whilst uncovering Interior Ministry corruption, believes that Canada must impose sanctions on Russia, as they are an effective punitive strategy.  But could sanctions act as a crucial ‘mobilization factor […] much needed to reform the resource-driven and export-oriented economy‘, as this comment piece argues?  Royal Dutch Shell says it will defer from new investments in Russia in the immediate future as a result of the Ukraine crisis.  Tourism is also a sector that may well be hit.  A new Levada center poll has found that nearly six in every 10 Russians think that their country is heading in the right direction, the highest approval rate in two decades.

Ballerinas in the Ukrainian city of Odessa have reportedly performed a dance from the Swan Lake ballet for President Putin in a nod to Soviet era dissident practices.  ‘Eastern Ukraine is on the jagged edge of anarchy‘.  The Independent reports that the country is ‘full combat alert’ as interim president Olexander Turchynov warned that ‘the threat of Russia starting a war against mainland Ukraine is real‘.  On a visit to Moscow to solicit support, the leader of the self-declared ‘Donetsk People’s Republic’, Denys Pushylin, says the eastern Ukrainian region will not participate in the presidential election scheduled for next month.  Ukraine has detained Russia’s military attaché to Kiev on suspicion of spying and ordered his expulsion from the country.  The European Court of Human Rights has ruled that Russian authorities failed to undertake a proper investigation into the suicide of a conscript soldier and awarded his mother $41,500 in damages.  This article challenges the commonly held view that Russia has a problem with population decline.

The politician behind the St Petersburg anti-gay law, Vitaly Milonov, has found a new target in the form of pop music extravaganza, the Eurovision Song Contest.