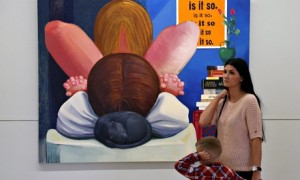 Ukrainian President Petro Poroshenko has announced he will not renew the ceasefire agreed with Russia, which expired last night, vowing instead in a televised statement, ‘we will attack and free our lands‘.  He blamed the ‘criminal actions of the fighters‘ who violated the truce ‘more than a hundred times‘ for the failure of the peace plan.  There has been, as of yet, no response from the Kremlin, though Putin ally and State Duma chairman Sergei Naryshkin decried Poroshenko’s decision.  Russian share prices have dipped following the announcement of the Ukrainian President.  Subsequent to the death of a Russian cameraman on the weekend, the Foreign Ministry has accused Kiev of endangering the lives of media workers.   Gas flows to Ukraine from Russia apparently remain stable, despite the issues over outstanding debt.  Russian manufacturing activity has slowed for an eighth successive month as a result of the Ukraine crisis.  Moscow is demanding an enquiry into the alleged use of chemical weapons against independence forces in Ukraine’s east.  Whilst certain parts of Russia have witnessed an influx of Ukrainians fleeing unrest, RFE/RL looks at why certain Russian nationals have decided to emigrate to Ukraine.

Washington has reportedly requested Moscow’s formal approval of its appointment of John Tefft, a former ambassador to both Georgia and Ukraine, as ambassador to Russia.  A new report by a U.S. computer security company has identified the Russian hacker group known as ‘Dragonfly’ as responsible for a number of attacks against Western energy giants.

As the law banning profanity in the arts comes into effect today, touching works by national literary heroes such as Fyodor Dostoyevsky and Alexander Pushkin, the Guardian considers it in the context of a ‘moral crusade that dovetails with President Vladimir Putin’s ideological hopes to create a “national and spiritual identity” for Russia’.  A number of artistic works in the European art biennial Manifesta 10, which has just opened in St Petersburg, are an attempt to challenge the city’s repressive position on gay rights.