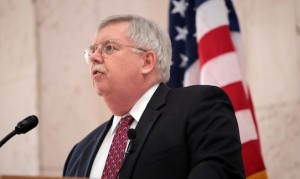 Following on from Monday’s order to pay $50 billion in a ruling at the Hague, the ECHR has now ordered Russia to pay €1.9 billion in compensation to former shareholders of one time oil giant Yukos, a record sum for the Strasbourg court.  The court found that Russia had failed to ‘strike a fair balance’ in its treatment of the company founded by Mikhail Khodorkovsky, confiscated by the Kremlin.  Ex-shareholders in the corporation are looking to assets of Rosneft and Gazprom to recuperate their losses.  Russia may appeal the ECHR’s decision and its discontent indicates it will.  Today, ‘big brother is watching you‘, says one online editor discussing the new law obliging bloggers with more than 3,000 daily readers to register with a mass media regulator, which comes into effect today.  Prosecutors are threatening to shut down a Russian-language gay news website on the basis of breaching the gay propaganda law.  A Russian rights ombudsman has taken the U.S. to task over ‘illegal human experiments‘.  The U.S. Senate has voted for John Tefft to become the country’s new ambassador to Russia.  A U.S. senator wants Putin’s former press secretary Mikhail Lesin investigated on suspicions of using illegally obtained funds to purchased $28 million worth of real estate in California.

The EU has officially barred Russia’s biggest state-run banks – Sberbank, VTB, Gazprombank, Vnesheconombank and Rosselkhozbank – from raising financing on Western capital markets, a move which Sberbank says ‘violates the foundations of the global finance system‘.  G7 countries have agreed to block World Bank projects in Russia.  Lukoil admits that sanctions will affect its investment programme.  Mark Adomanis explains why import substitution is not a happy scenario for Russia.

A new VCIOM poll has found that life satisfaction and social optimism indices in Russia have skyrocketed in the past three months.  A likely story?  As long as Putin has the ‘zombie box‘ on his side, his popularity is unlikely to crumble, argues this commentator.  Deputy prime minister Dmitry Rogozin has been noted using a poodle in his latest attempt to scorn President Obama.

PHOTO: John Tefft deliveres a speech on “The Importance of Economic Reform to Ukraine” while working as U.S. ambassador to the country. (U.S. Embassy Kyiv Ukraine)