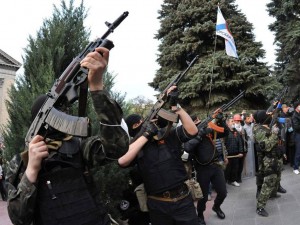 Pro-Russian separatists in Slavyansk claim that Kiev has launched a ‘large-scale operation‘ to reclaim the city.  Ukrainian soldiers have apparently taken control of a rebel checkpoint just to the south of the town.  One Ukrainian pilot has apparently been killed and others injured.  In the city of Donetsk, the prosecutor’s office has now been overtaken by separatists.  President Putin has urged Ukraine to withdraw its military from the eastern and southern regions of the country.  In evidence that the country is gearing up for prolonged military activities, interim Ukrainian President Oleksandr Turchynov has announced  that the country will reinstate military conscription.  This article argues that the 2008 Georgian war alerted Moscow to the inadequacies of its army which, the Ukraine crisis suggests, have been corrected.  NATO Deputy Secretary-General Alexander Vershbow says the alliance must now start to perceive of Russia as an adversary.  Feeling increasingly threatened, NATO’s newer eastern members have voiced hope that, despite a 1997 agreement with Russia, the alliance will have forces stationed permanently in their nations.  Romania is among those particularly concerned.  RFE/RL has an interactive map displaying what it terms Russia’s ‘coercive diplomacy‘.

If Putin were to annex the whole of east Ukraine, in financial terms it would be equivalent to ‘a decision by the United States to annex the 150 million citizens of Mexico under the agreement that Mexican citizens would receive U.S. pensions, and public servants would be paid at U.S. wage scales’, argues this Forbes commentator.  German Chancellor Angela Merkel, who is reportedly fuming that a top foreign policy attended Putin’s birthday party, has ruled out military intervention in the dispute with Russia over Ukraine.  Anne Applebaum believes that ‘the West needs to rethink its military strategies in order to counter new tactics, paramilitary and psychological, that Russia has begun to deploy.‘  Exxon Mobil says that its plans for Russian expansion remain on track despite sanctions.  Norway’s $860 billion sovereign wealth fund will defer from making new investments in Russia because of the conflict.  Russia is still threatening to file a dispute at the WTO over EU’s energy rules that question Gazprom’s business model.  MasterCard Inc is concerned about President Putin’s plan to create Russia’s own domestic card payment system.

An attempt by Greenpeace activists to block a Russian tanker loaded with Arctic oil from docking in Rotterdam has been thwarted by Dutch police.  LGBT residents of Crimea are now subject to Russia’s ‘gay propaganda’ law, as evidenced by the fact that this year’s pride parade, due to take place on April 24-25, was cancelled.  Freedom House’s latest report on media freedom has found that conditions in Russia remain ‘grim‘.