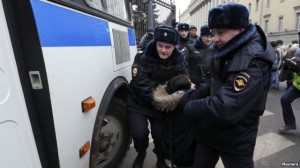 At the request of President Putin, Russia’s upper house of parliament unanimously approved a measure to deploy military forces in Ukraine as the situation in Crimea, where Russian troops have surrounded several towns and seized weapons, intensifies.  ‘This is not a threat: this is actually the declaration of war to my country’, says newly appointed Ukrainian Prime Minister Arseny Yatseniuk.  President Putin has apparently told German Chancellor Angela Merkel that Russia’s actions in Ukraine are ‘fully congruent to the current extraordinary situation in that country‘.  Prime Minister Dmitry Medvedev has stated on his Facebook page that the Kremlin is ready to engage positively with Ukraine, but not with those who seized power in breach of the Constitution and other laws of the State.  The Kremlin has warned Kiev that it may lose a discount on the gas price it now pays to Gazprom due to its outstanding gas debt.  Around 50 demonstrators protesting against Russian military intervention in Ukraine were detained yesterday in Moscow, Dozhd television reported using police estimates, whilst independent detention monitoring website Ovdinfo.org put that figure at 360 people. RFE/RL has a video report.  In the Russian capital around 20,000 people turned out for a march in support of the Russian-speaking population in Ukraine.  According to Russia’s border guard service around 675,000 Ukrainian citizens have migrated to Russia since the beginning of 2014 amid fears of political instability in their homeland.

The German Chancellor Angela Merkel and U.S. President Barack Obama have reportedly agreed that Russia’s ‘unacceptable intervention‘ in Crimea was a ‘violation of international law‘, concerns echoed by NATO secretary-general Anders Fogh Rasmussen.  Obama has warned the Kremlin that there would be costs for any armed intervention.  Seven of the eight governments of the G8 bloc have denounced member nation Russia for its actions in Crimea and have ceased preparations for a June summit due to be hosted in Sochi.  Within Russia, talk of war has been played down by Deputy Minister of Foreign Affairs Grigory Karasin and by speaker of the Russian Federation Council upper parliament house Valentina Matviyenko, who said on television that, ‘no war is ever possible between us, we are brotherly peoples, we are part of the Slavic world’.  See here how Putin’s behaviour has invited a comparison with Hitler.

Russian hypermarket chain Lenta’s stock market debut has been negatively affected by the troubles in Ukraine.  Steel maker Severstal sees no hope for an increase in steel prices this year.  Armenia is apparently on the cusp of joining the Russia-led customs union with Belarus and Kazakhstan.

PHOTO: Police detain a protester during a rally near the Russian Defense Ministry headquarters in Moscow. (Reuters)