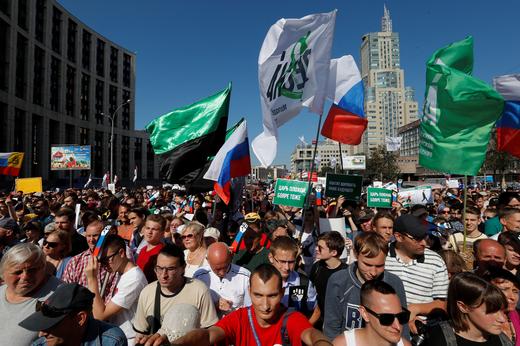 A new bill has been introduced in the US Senate that would increase the current sanctions regime to include Russian sovereign debt transactions. One of its main sponsors dubbed it a “bill from hell”; Reuters says the move “will not pack the punch it once would have”, but the possibility has already caused the ruble to fall. Forbes explains the process that companies must go through in order to comply with existing sanctions against Russia, but insists that “a compliant business operation in Russia remains possible” for Western investors. Oleg Deripaska, whose group of companies, including Rusal, has been hit hardest by the most recent round of US sanctions, apparently believes that the demands on his businesses for compliance are unacceptable and make no economic sense. A Levada Centre poll found an improvement in Russians’ view of the US following the Trump-Putin summit in Helsinki last month. A Russian spy may have been working in the US embassy in Moscow for over a decade.

The Council of Europe’s rapporteur on the Boris Nemtsov murder investigation has been banned from entering Russia, “cap[ping] years of Kremlin efforts to hinder any meaningful investigation into the most high-profile political assassination in modern Russia,” writes Vladimir Kara-Murza. Amnesty International says it is not being granted access to Ukrainian filmmaker Oleg Sentsov, who is currently on hunger strike in prison. Over 10,000 new North Korean workers have registered in Russia since September, possibly violating UN sanctions. A US judge in the Manafort case objects to the use of the word “oligarch” because, he says, it has taken on a “pejorative” meaning.

The CEO of Austria’s OMV says LNG bought through Russian pipelines is generally twice as cheap for European consumers as the same product from the US. OMV is one of Gazprom’s partners on the Nord Stream 2 gas pipeline, which has just rerouted to bypass Denmark. With 33 new nuclear plants on Rosatom’s order book, and a dozen currently under construction, the Economist looks at the issues surrounding Russia’s export of nuclear power. Kaz Minerals plans to buy a Russian copper project from Roman Abramovich sent its market value plummeting.