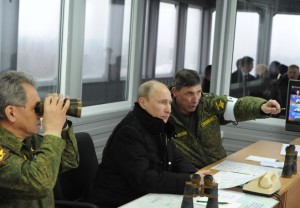 In an address to the UN Council on Human Rights in Geneva, Foreign Minister Sergei Lavrov insisted that Russia’s moves in Crimea were a matter of ‘protecting our citizens and compatriots, about protecting the most fundamental human right – the right to live and nothing more’.  The BBC wonders if Russia has a case.  This commentator sees a precedent for Russia’s current actions in the Georgia invasion of 2008.  Another analyst warns, ‘Ukraine is not Georgia. It is a huge country in the heart of Europe, bordering on three EU and NATO members’.  See here for an overview of why the Crimea is of such geopolitical importance to Moscow.  Local lawmakers in the region are apparently mulling changing the clock to Moscow time.  At an emergency meeting of the UN Security Council in New York, the Russian Ambassador Vitaly Churkin asserted that ousted President Viktor Yanukovych had requested Russia’s armed forces be deployed in Crimea before he fled the Ukrainian capital.  The Kremlin has rebuffed reports that it forced an ultimatum to surrender on Ukraine’s new administration.  Apparently some of the troops involved in military exercises in Crimea have been returned to their bases.  Meanwhile a new set of surprise live fire exercises, observed by President Putin and Defense Minister Sergei Shoigu, have been undertaken in Russia’s western Kaliningrad and Leningrad Regions.  The country’s Internet monitoring agency has reportedly placed a block on 13 Internet pages linked to the Ukraine protest movement.

Moscow has successfully, it would seem, solicited China’s support for its actions in Ukraine.  The United States has suspended all military engagements with Russia, with Secretary of State John Kerry warning that suspension from the G8 and economic sanctions could result from Moscow’s Crimea incursion, comments which have been lambasted by the Russian Foreign Ministry as ‘unacceptable threats‘ and ‘Cold War clichés‘.  Despite its tough rhetoric, the UK is unlikely to initiate sanctions for fear it will derail the global economy.  Investors are spooked, share prices are plummeting and the ruble is dropping to historical lows, but the Moscow Times explains how the Ukraine crisis is actually helping the Russian economy.  RFE/RL offers an ‘explainer‘ of the financial effects of the crisis.  Oil major Rosneft could purchase Ukraine’s Odessa oil refinery.

The Moscow Bureau of Human Rights has found that in 2013, the number of ethnically motivated attacks in Russia decreased and convictions in xenophobic attack cases increased.  Forbes’ ranking of the world’s 100 wealthiest citizens includes 10 Russians, with the richest among them Internet tycoon Alisher Usmanov, who has a net worth of $18.6 billion.