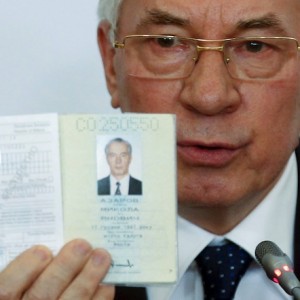 Sanctions prompted by the crisis in Ukraine could see Russia lose 9% of its GDP, the IMF has announced, citing low oil prices, problems of external access to financial markets, along with ‘slow-moving structural reforms, sluggish investment and adverse population dynamics’.  The ruble has dropped to its lowest level since March as oil prices continue to tumble.  Moscow has warned Washington that it will seize U.S. assets if American courts freeze Russian ones as part of the $50 billion damages award to shareholders of defunct oil company Yukos.  Sweden has expelled a Russian diplomat and Moscow has followed with a tit-for-tat expulsion: no details have been disclosed as to the nature of the disagreement.  A group of exiled Ukrainian officials now living in Russia, led by former Prime Minister Nikolai Azarov, have created the ‘Savior of Ukraine Committee’, which will militate for the ousting of the Poroshenko regime in Kiev.  Kremlin spokesman Dmitry Peskov has denied that Russia instigated the initiative, though Moscow will ‘analyze’ the group’s proposals. Defense Minister Sergei Shoigu has announced the creation of a new branch of Russia’s armed forces: the Aerospace Forces, which will unite the air force and recently created Aerospace Defense Forces.  World powers have complained of a fourfold increase in NATO scrambles over Europe in 2014, and nearly 85% of these were to intercept Russian aircraft.

Russia, which remains committed to supporting Syrian President Bashar Assad, has criticised Washington’s proposal to provide air cover for Syrian rebels in the fight against Islamic State.  Foreign Minister Sergei Lavrov has invited Hamas leader Khaled Mashal to Moscow following a meeting with him in Qatar.

In a rare boon to local protestors, the Russian Orthodox Church seems to have abandoned plans to build a church in a park cherished by local residents after they mounted a storm of complaints.  Dmitry Peskov’s wedding watch scandal, which one official claims was engineered knowingly to taunt the opposition press, has prompted RFE/RL to look back on a plethora of Russian corruption scandals involving luxury timepieces.