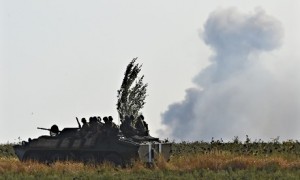 Heavy shelling has been witnessed in the area of the Mariupol port in eastern Ukraine, as Ukrainian forces attempt to push back an attempt by rebels to take the strategic port on the sea of Azov.  The port is crucial for steel exports and would leave Russia in control of the coastline.  This is just hours before a ceasefire, long in the making, is to come into effect. Ukraine’s President Petro Poroshenko has expressed cautious optimism about the truce, though he has reportedly surprised NATO officials by revealing that, while NATO was not furnishing Ukraine with weapons, at least one country, whose name he did not reveal, was providing Kiev with armaments.  German Chancellor Angela Merkel, in comments made at the September 4-5 NATO summit in Wales, asserted that there is a consensus among NATO members that there cannot be a military solution to the crisis in Ukraine.  A Russian TV crew from REN-TV television channel has reportedly come under fire in Donetsk.  President Putin has signed a decree to posthumously award the late Rossiya Segodnya photographer Andrei Stenin with an Order of Bravery.  Is Russia trolling NATO on Twitter with toy tanks?  The MICEX continue to show signs of recovery thanks to reports of the truce.

French President Francois Hollande has said that the Mistral deal has not been cancelled, but a ceasefire and a political settlement are the key conditions for the transfer of the warship to Russia.  The Agriculture Ministry has proposed restricting grain exports in the 2014/2015 season as a possible way of balancing the domestic market.  The European Commission has permitted Russian state-owned oil company Rosneft to buy an oil trading department of Morgan Stanley.  Putin ally and tycoon Gennady Timchenko, who is on the U.S. sanctions list, has cut his stake in petrochemical company Sibur down to 21.3%.  The Russian federal consumer rights protection service Rospotrebnadzor has banned all confectionery imports from Ukraine as of today.

Interior Minister Vladimir Kolokoltsev has declared that citizens of the CIS states account for 86% of crimes on Russian territory. Pussy Riot members Nadezhda Tolokonnikova and Maria Alyokhina have launched a new Internet news agency called Mediazone, which will report on human rights in the Russian prison system.  Opposition deputy Ilya Ponomaryov, currently in California, has pledged he will not return home unless a foreign-travel ban imposed against him by a Moscow court is lifted.  Prominent gay rights activist Natalya Tsymbalova has lodged a formal request for political asylum in Spain after receiving death threats following her participation in a rally in support of Ukraine.  RFE/RL reports on how the Russian authorities are reportedly creating their own volunteer groups to counter any Maidan-style movements on home territory.

PHOTO: A Ukrainian army vehicle is seen against smoke from separatist artillery fire on the outskirts of Mariupol. (Philippe Desmazes/AFP/Getty Images)