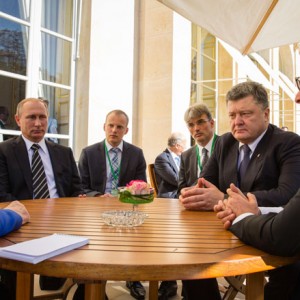 After five days of bombing, Russia has pledged to broaden its campaign in Syria, in which it claims to have struck ten ISIS targets thus far.  The announcement comes amid criticisms from numerous corners that Moscow’s strikes have hit non-ISIS rebel groups and civilians: U.S President Barack Obama warned the move could suck Moscow into a ‘quagmire’, British Prime Minister David Cameron called it a ‘grave mistake’, and Turkish Prime Minister Tayyip Erdogan described it ‘quite unacceptable’.  At least two Syrian rebel groups supported by Washington claim they were bombed in the air strikes.  President Putin has repudiated what he calls these ‘information attacks’, noting, ‘the first reports of civilian casualties appeared before our planes took off’.  Reuters examines U.S-Russia competition in the Arctic, where, it claims, ‘the Kremlin holds the advantage on the ocean’s surface; the Pentagon dominates beneath the waves’.

The OSCE has apparently identified a new kind of Russian weapons system in rebel-held Ukraine this week, suggesting despite action in Syria, Moscow still has its eye on neighbouring territory.  On a more positive note, ‘cautious optimism’ was reportedly noted following negotiations of the ‘Normandy Four’ (German Chancellor Angela Merkel, French President Francois Hollande, President Putin and Ukraine’s President Petro Poroshenko) on the conflict.  Outcomes included a pledge to postpone controversial elections in the country’s rebel-held eastern  territories and the withdrawal of small-caliber weapons and tanks from the front lines in the same region.  Russia, with apparent support from Venezuela and China, is considering proposing that the U.N. adopt a declaration of ‘non-interference into domestic affairs of sovereign states’.

Crude oil futures have risen on the news that Russia is apparently willing to discuss the situation in the global oil market with OPEC, after months of resistance.  After 16 years of involvement in the Russian telecoms firm, Telenor has announced it will sell its $2.4 billion stake in VimpelCom Ltd, which is co-owned by tycoon Mikhail Fridman.  The Economy Ministry’s latest forecast sees Russia’s GDP fall by 3.9% in 2015, but rise by 0.7% in 2016.