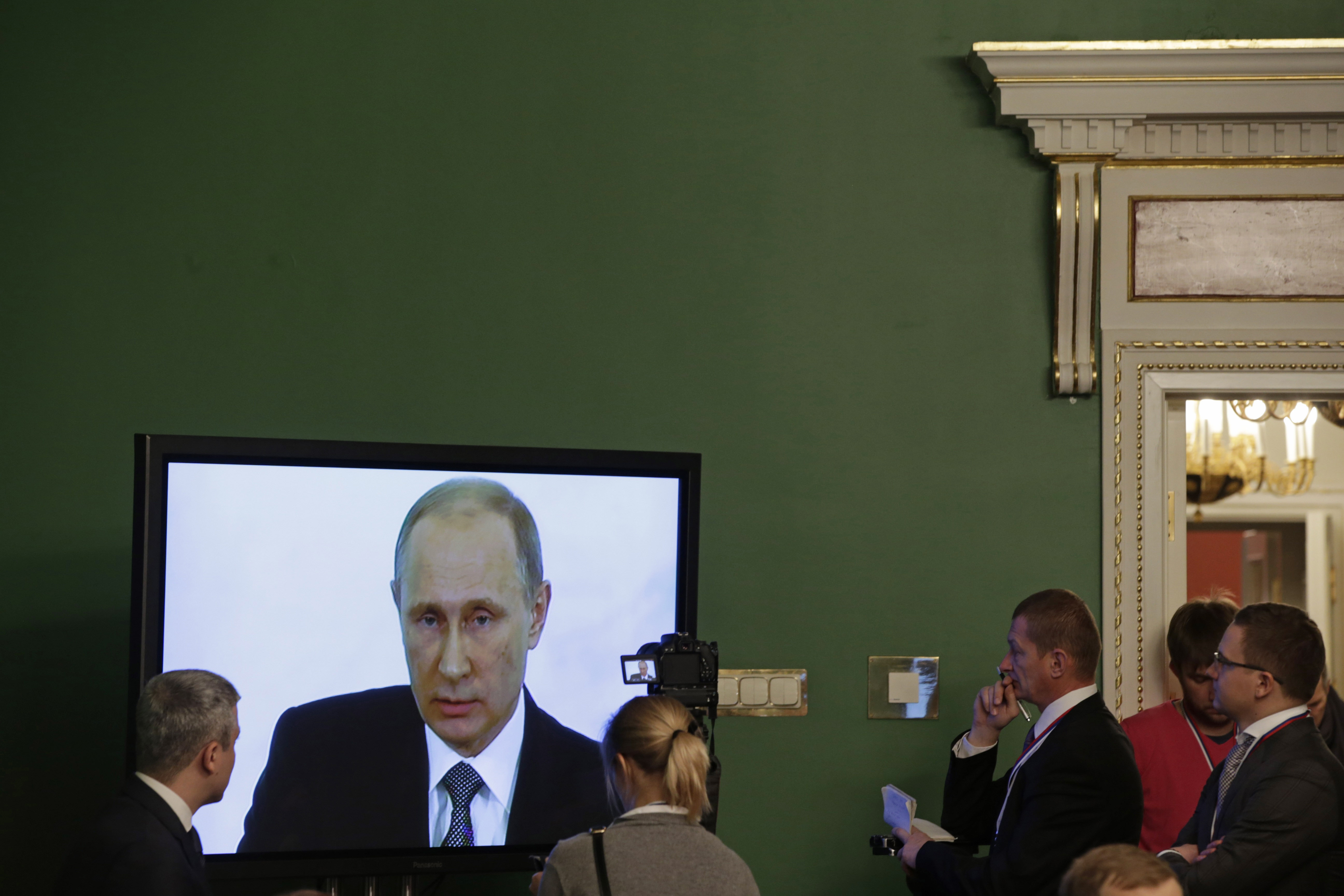 During his keynote State of the Union address yesterday, Vladimir Putin said that Russia’s actions in Ukraine had little to do with the Western decision to impose sanctions, because ‘they would have come up with another reason to contain Russia’s growing capabilities’. He promised a freeze on taxation levels, and a reduction in red tape for small businesses.  He also ordered the Central Bank to track down speculators and prevent them from wreaking havoc on the ruble, saying that they could not hide from the authorities. ‘On hearing this, Central Bank Chairwoman Elvira Nabiullina, a celebrated economist, bowed her head and appeared to wince,’ says Time’s report, which paints one of the more scathing pictures of Putin’s address.  The New York Times analyses some of Putin’s recent remarks that, it says, encourage pro-Russian separatists and nationalists.  The ruble is now the second-weakest currency in the world, having lost 39% of its value this year.  The Central Bank says it is prepared to spend unlimited amounts of money to support it.

Sberbank head German Gref says Russia’s banking system is struggling with ‘a massive, grand liquidity dislocation’, making it difficult for them to fund long-term projects.  President Vladimir Putin says Russia’s ‘rainy day’ reserve funds, such as the National Welfare Fund (which is supposed to cover pension liabilities), should be used to support the banks.  Putin also proposed the ‘one-time offer’ of an amnesty for capital returning to Russia, promising that funds returned would not be subjected to taxes or questioning.  The European Court of Human Rights has ordered Russian authorities to pay monetary compensation to Alexei Navalny and Ilya Yashin (€26,000 each) for their arrest and two-week detainment following an unsanctioned opposition march in December 2011. Human Rights Watch says Russia’s human rights situation is at its worst in a decade, noting a marked turn for the worse since Putin’s return to power in 2012.

The President of the European Commission says Russia’s move to suspend construction on the South Stream gas pipeline indefinitely is an attempt to ‘blackmail’ Bulgaria.  U.S. Secretary of State John Kerry made pointed remarks about the deaths of Russian soldiers in Ukraine, likely ‘to puncture the Kremlin’s carefully crafted narrative that Russian forces have not intervened in the conflict’.

PHOTO: Members of the press watch Russian President Vladimir Putin during his annual state of the nation address in the Kremlin in Moscow, Russia, on Thursday, Dec. 4, 2014. (AP Photo/Pavel Golovkin)