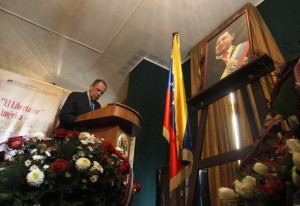 President Vladimir Putin praised the legacy of ‘close friend’ Venezuelan President Hugo Chavez, calling him ‘an unorthodox and strong person’ who devoted his life to ‘justice and equality’.  Analysts are speculating about the future of Russia’s oil contracts with Venezuela amid the latter’s new political uncertainty, as it was announced that Rosneft president Igor Sechin will head the Russian delegation at Chavez’s funeral.  Trade and Industry Minister Denis Manturov, who will also attend, said that a change in Veneuelan leadership will not affect ongoing contracts and agreements with Russia.  Putin’s spokesman Dmitry Peskov supported this, asserting that ‘a constructive, positive and mutually beneficial agenda will remain a constant for any government, as it will from the Russian side’.  In a new interview, Former Soviet leader Mikhail Gorbachev criticised the Kremlin’s ‘thieves and corrupt officials’, denounced new laws as an attack on citizens’ rights, and urged Putin ‘not to be afraid of his own people’.  Russia is to allow 36 Georgian wineries and four makers of mineral water to register their products, marking the end of a seven-year ban on Georgian imports.  According to the Volga Center think tank, Russian speakers are fighting against Bashar al-Assad’s regime in Syria: ‘The presence of Russian-speaking militants in Syria could be a serious cause for concern for the Russian government, the experts said, given the likelihood that they could return to Russia battle-toughened.’

A Levada Center poll indicates that most Russians approve of women participating in politics – 22% of respondents do not.  According to recent estimates, women account for 7% of the total number of board members in Russia’s top 50 publicly traded companies.  Novaya Gazeta reporter Yelena Milashina will be a recipient of the American International Women of Courage award.  The negative online reaction to Elmira Abdrazakova’s winning the Miss Russia 2013 competition reveals racial tensions against ethnic minorities. The Guardian untangles the ‘intrigue’ behind Pavel Dmitrichenko’s confessing to the acid attack on Bolshoi director Sergei Filin.  Michael Bohm unpicks five myths about the death of adoptee Max Shatto.

Foreign Ministry spokesperson Alexander Lukashevich says Russia is ready to discuss a U.N. peacekeeping force for Mali.  Moscow’s City Court upheld a decision to place Left Front leader Sergei Udaltsov under house arrest, despite his lawyers’ insistence that it is unlawful.  China Construction Bank is planning to open a Russian branch, and a Czech development group is planning a $910 million investment into a Moscow business park.  Rosneft has signed long-term crude supply contracts with Glencore and Vitol which begin with a $10 billion prepayment.  Billionaire Mikhail Prokhorov says he plans to run for a seat in the Moscow city legislature next year.

PHOTO: Russia’s Foreign Minister Sergei Lavrov writes a condolence book as he visits the Venezuelan embassy to pay his tribute to the late Hugo Chavez in Moscow, March 6, 2013. REUTERS/Maxim Shemetov