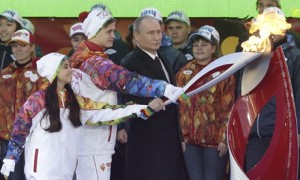 As the Olympic flame reached Moscow in an ‘elaborate’ ceremony, an investigation by the Guardian has revealed that those participating in the games as players and spectators ‘will face some of the most invasive and systematic spying and surveillance‘ in the Games’ history thanks to the Kremlin’s Sorm surveillance system.  Whilst Putin greeted the Olympic flame with a speech glorifying the diversity of Russia, Sergei Nikitin, the head of Amnesty International in Moscow, argued that ‘the Olympic flame can cast light on human rights violations that the Russian regime wants to hide with pomp and circumstance’.  Meanwhile Moscow authorities refused to sanction a 15-person Amnesty International rally on Sunday.  There are hopes that the Sochi Paralympics will draw attention to the plight of the disabled community in Russia, who face innumerable hurdles in daily life, this report suggests.  The Netherlands has initiated legal proceedings against Russia over the unlawful detention of 30 Greenpeace activists accused of piracy in an Arctic drilling protest.  Moscow, it would seem, is nonplussed.  Protests against the Greenpeace detentions have taken place across the world, attracting some famous names.  Australia’s foreign minister, Julie Bishop, has raised concerns about the detainees with Russia’s deputy foreign minister, Igor Morgulov, on the sidelines of the Apec summit in Bali.

A cast of Dutch actors performing in St Petersburg have used their platform to speak out in defence of gay rights.  The Russian Orthodox Church has found a new way of spreading the word: audio programmes on trains.  At this weekend’s United Russia party conference, Prime Minister Dmitry Medvedev urged party members to help encourage the integration of immigrant workers.  President Vladimir Putin’s absence at the conference has been taken by some observers as a sign of the party’s decline.

Foreign Minister Sergei Lavrov and U.S. Secretary of State John Kerry have signed an agreement on the national nuclear threat reduction centres.  The two men also discussed the Syrian conflict, reiterating that ‘there is no military solution‘.  Oil giant Rosneft is unperturbed by the threat of increasing shale gas production in the U.S.  The Kremlin anticipates a considerable increase in exports of LNG to Japan in the near future.  Russia has suspended imports of dairy products from Lithuania, which will imminently host an EU summit aimed at drawing closer ties with Europe.  Russia is looking at ways to use the WTO to arbitrate in commercial disputes with the European Union, particularly within the energy sphere.