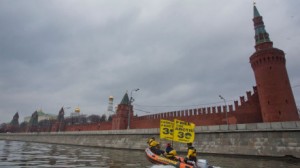 The Russian government has apologised to two Norwegian journalists who complained of harassment by police whilst reporting on developments in the Olympic town of Sochi.  The plight of Greenpeace’s Arctic 30 will be heard by an international maritime court; proceedings have begun following a complaint from the Netherlands over Moscow’s incarceration of the activists.  Moscow transport police have detained four people on motorboats who are suspected of participating in a Greenpeace protest for their jailed comrades on the Moskva river.  The city authorities have also held at least 14 people from a group of 100 who gathered in an unsanctioned demonstration in support of the Bolotnaya Square protestors, one of whom, Sergei Krivov, is now on the 49th day of a hunger strike to protest against what he says are violations of his right to a fair trial.  Colombia wants to know why two Russian Tupolev Tu-160 strategic bombers bombers allegedly violated the country’s airspace last week.  Russia is apparently disconcerted by NATO’s plans to hold its biggest military exercise in seven years this week in the Baltic states and Poland.

Fugitive tycoon Sergei Polonsky has told reporters that whilst in a Cambodian jail he was forced to sell his real estate developer Potok for a fraction of its worth.  Despite the apparent readiness of the controversial businessman, who is wanted in Moscow for alleged corruption, to reach a deal with investigators and come back home, his return is far from certain.  The Kremlin has had to revise its forecast for average annual economic growth over the next twenty years downwards from 4% to 2.5% in an economy relying heavily on oil and gas.  Double digit inflation has hit food prices over the course of 2013.  The head of the State Pension Fund has said the idea of raising the retirement age will not be up for discussion until at least 2018, when the next presidential election will occur, although citizens will be encouraged to work longer.

A full report on the ‘streaking fireball‘ that was the Chelyabinsk meteorite has revealed that the space rock carried 30 times the explosive energy of the Hiroshima bomb.