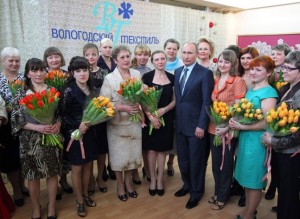 This year marks the 100th year of International Women’s Day in Russia, and will be a work holiday for many, with female employees receiving gifts from their male colleagues.  ‘Where do flowers and perfume once a year get you if you have nothing the next 364 days?’  Russia’s only female army General, Yelena Knyazeva, says that a woman’s place is in the home, not the military, and this piece notes the paucity of women in prominent government positions.  Federation Council speaker Valentina Matviyenko has topped a press list of Russia’s 100 Most Influential Women.  The Kremlin wants to ban officials from using language traditionally linked to corruption, including phrases such as ‘Thank you doesn’t butter my bread’, and ‘The question is difficult to solve, but possible’.  Investigators have opened a case against Duma deputy and A Just Russia member Oleg Mikheyev over fraud charges.  Vladimir Putin says that the new head of the Bank of Russia ‘will be unexpected. You will like it.’

Foreign Minister Sergei Lavrov says that Moscow ‘absolutely’ will not tell Syrian President Bashar al-Assad to stand down, and that Russia is ‘not in the regime-change game’.  The prosecutor-general is considering bringing charges against Akhmed Bilalov, the former deputy head of the Russian Olympic Committee, of misusing funds (Bilalov was the one that Vladimir Putin publicly criticised and then dismissed during a visit to Sochi last month).  Russia is planning to send 25% of its crude exports to eastern markets by 2015, largely thanks to the $23 billion East Siberia Pacific-Ocean pipeline, which will reach full capacity in two years.  Rosneft has signed a deal to buy interest in 20 of ExxonMobil’s deepwater exploration blocks in the Gulf of Mexico.  Lukoil’s annual profits have reached a record high of $11 billion.  The U.S. says that Russia and China are buying increasingly powerful surveillance technologies in a bid to control the Internet.

Author Mikhail Shishkin has pulled out of an international literary event because he says he does not want to represent a country with a ‘corrupt, criminal regime’.  Pavel Dmitrichenko, who confessed to masterminding the attack on Bolshoi director Sergei Filin, says he never intended for Filin to be splashed with acid; but he refused to apologise for his actions, and his request for bail has been denied.  Jailed Pussy Riot member Nadezhda Tolokonnikova has requested an early release on parole.  A state-television documentary alleges that William Browder, the former employer of Sergei Magnitsky, is part of an M16-led conspiracy.

PHOTO: Russian President Vladimir Putin poses with workers of the Vologda textile factory on the eve of International Women’s Day, in Vologda on March 7, 2013. (Mikhail Klimentyev/AP)