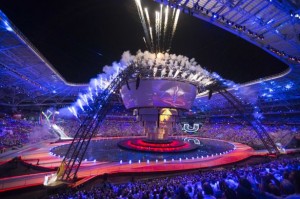 Opposition leader Alexei Navalny has used his final court appearance in Kirov to decry Russia’s ‘feudal system […] under which 83 percent of the country’s wealth is in the hands of half a percent of the population‘.  He has vowed to continue the fight. Supporters of the whistleblower in St Petersburg have plans to hold a rally for up to 5,000 people on July 18, the day of his sentencing.  Having recently been forced into hiatus by the Kremlin over its failure to register as a foreign agent, election monitor Golos has apparently found a way to continue its operations by transforming into a new legal entity.  A photograph of actress Tilda Swinton holding a rainbow flag in front of the Kremlin in solidarity with the oppressed LGBT community has reportedly set the blogosphere alight.  Last week’s flurry of activity against opposition figures is a clear indication ‘that the future here looks more and more repressive‘.  A new film made about the work of Pussy Riot receives praise here.

Acting Moscow Mayor Sergei Sobyanin has called for stricter controls on immigration after around 2,500 migrants were detained in the Russian capital in a three-day police operation.  At Russia’s request, French police have detained former Moscow-region finance minister Aleksei Kuznetsov in St Tropez.  The former minister is wanted over allegations of fraud, money laundering, and embezzlement involving up to $105 million. Lawmakers are mulling a new bill, propelled by A Just Russia party, which would forbid civil servants from sealing business deals with companies run by their relatives.  A new law which would dramatically increase the powers of the central bank has been approved by the state duma.  Moody’s has cut by a notch the ratings of Russia’s major state lenders Sberbank and VTB24 pointing to Russia’s over reliance on high oil prices and reduced Reserve Fund and National Wealth Fund.  In an apparent indication of a deepening conflict between Prime Minister Medvedev and the siloviki elements of the regime, the former has sacked senior resources official Alexander Popov, the head of Rosnedra, believed to be a close ally of Rosneft chief Igor Sechin.

On a visit to Astana to meet Kazakh counterpart Nursultan Nazarbaev, where Afghanistan, amongst other issues, was discussed, President Putin warned that Egypt ‘is moving in the same direction‘ as conflict-torn Syria.  ‘Venezuela is waiting for an answer from Snowden […] This, perhaps, is his last chance to receive political asylum’: Alexei Pushkov, the head of the international affairs committee indicates that Moscow’s patience with the NSA whistleblower might have worn thin.  A rumour that Obama may cancel his visit to Moscow in September if Snowden remains in the country has been dismissed by the Kremlin.

PHOTO: Fireworks going off as the flame is lit at the opening ceremony of the Universiade Games in Kazan on July 7, 2013.  The 27th Games were opened by Russia President Vladimir Putin.  (Alexander Zemlianichenko / AP)