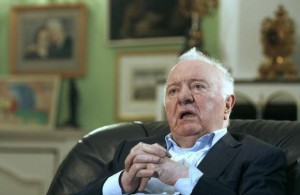 Having lost a key stronghold on the weekend, pro-Russian rebels have stepped up attempts to protect their hold on the Ukrainian city of Donetsk by blowing up three bridges on key roads leading into the town and erecting barricades.  Additionally, several hundred rebels have reportedly seized Popasnaya, a city of 20,000 people in the Luhansk region.  Russia’s Foreign Ministry has stated it continues to record ‘war crimes‘ taking place in Ukraine and has castigated the E.U. for failing to respond adequately.  The E.U. is in fact planning to extend its sanctions list against Russia.  Kiev has vowed to use deadly weapons against any intruders who violate its state border in the Sea of Azov, which is divided between Ukraine and Russia.  Ria-Novosti reports that Russian weapons and military hardware sales to foreign countries reached $5.6 billion in the first half of 2014, a ‘very impressive and substantial figure‘, according to President Putin.  A new poll has found that two thirds of Russians oppose sending Russian troops to south-eastern Ukraine.  After a five-year hiatus, women will now be allowed to serve in the country’s Airborne Troops.

Opposition stalwart Sergei Udaltsov may face up to eight years in prison, if prosecutors have their way, for his part in the Bolotnaya Square protests of May 2012.  Russia’s Federal Drug Control Service has found that the number of Russians dying from drug overdoses has nearly tripled since 2012, reaching a total of as many as 100,000 a year.  Prurient Liberal Democratic Party deputy Roman Khudyakov has urged the Central Bank to remove the image of the statue of Apollo from the Bolshoi Theater portico on its 100-ruble bills since it shows ‘intimate parts of the body‘ which could trouble young minds.  Foreign Minister Sergey Lavrov hopes that stalled cooperation with Bulgaria on the South Stream pipeline can soon resume.

Former President of Georgia and Soviet foreign minister Eduard Shevardnadze had died at the age of 88.  Vladimir Putin has expressed his condolences, as has Mikhail Gorbachev who described his ally in perestroika as an ‘extraordinary, talented person‘.  Read a full obituary here.

PHOTO: Georgia’s former President Eduard Shevardnadze speaks during an interview with Reuters at his residence in Tbilisi September 4, 2009. (REUTERS/DAVID MDZINARISHVILI)