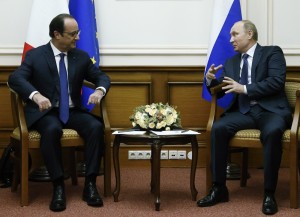 Despite a slew of attempts by the authorities to thwart him, Yukos founder and Kremlin critic Mikhail Khodorkovsky managed to give a speech to a crowd in a St Petersburg hotel in which he stated, ‘our goal is to demonstrate that there is an alternative to the current regime.’  The weekend also saw members of the Solidarity democratic opposition movement assemble in Moscow to criticise the verdicts on the Bolotnaya Square participants and President Putin’s policies in Ukraine.  French President Francois Hollande held an unexpected meeting with the Russian President in Moscow, the first visit by a head of state from a major Western power to Russia since March, described as ‘a rare display of goodwill‘.  Subsequent to the meeting Putin said he hoped a new agreement on implementing a ceasefire in eastern Ukraine would be reached soon.  A Russian aircraft controversially seized by Nigerian authorities this weekend contains military cargo belonging to a French peacekeeping mission, the Russian Embassy in Nigeria has claimed.  Angela Merkel has accused Russia of punishing Moldova, Georgia and Ukraine for seeking closer ties with Europe.  She did add however that ‘there is no reason to talk about a war in the Baltics’.  The EU is concerned about Russia’s overtures towards the Western Balkans.

What does Russia have in common with Lebanon, El Salvador and Iraq?  They are all countries where bondholders buy protection against default.  ‘It’s only a matter of time‘ before Russia faces this frightening prospect, says MarketWatch.  Even if Russians have a history of enduring hardship, without the carrot of improving living standards, will Russian citizens be able to take the stick of the Putin regime?  A buckwheat shortage panic will not help matters.  Nor will domestically produced automobiles, it seems: apparently only 5% of Lada-owning Russians are proud of their car.

As winter chills descends, Gazprom has reportedly received a prepayment of $378.22 million from Ukraine for natural gas supplies.  President Putin has been discussing energy cooperation with the leaders of Serbia and Hungary, following the decision to scrap the South Stream pipeline, which would have crossed both countries.  ‘The likely high price tag of the project, Turkey’s strong negotiating position and unresolved political concerns‘ all make Russia’s alternative to South Stream a potentially risky proposition.  Finland and Russia are deepening nuclear ties.