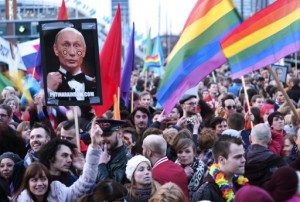 Journalist Mikhail Beketov, who was badly beaten in 2008 for his work in defending the Khimki forest and publicly attacking the region’s municipal government, has died of heart failure after choking on a piece of food.  A friend blamed the choking on tracheal scarring resulting from the attack, which left him unable to speak.  The president of a media company that owns local radio stations and advertising companies in Novosibirsk has been seriously injured in an attack by unidentified assailants.  President Vladimir Putin was accosted by topless protesters from the Ukrainian group Femen during his Europe trip yesterday, who shouted at him and called him a ‘dictator’; Putin responded that he had ‘enjoyed’ the protest and thanked the women for drawing more attention to the Hanover trade fair, whilst Putin’s spokesman, Dmitry Peskov, called on Germany to punish the women.  Hundreds of protesters also gathered in both Hanover and Amsterdam, shouting slogans against gay rights laws, restricted journalist freedoms, and the imprisonment of Pussy Riot.  At a press conference in Amsterdam, Putin defended Russia’s anti-gay laws, saying that the rights of sexual minorities are not being violated in Russia.

Anti-corruption activist and lawyer Alexei Navalny says that Vladimir Putin has ‘undoubtedly’ ordered the current embezzlement trial against him, and says he is preparing to face a prison sentence rather than leave Russia, as he believes that the ideal scenario for the authorities would be for him to leave the political scene.  Jailed Pussy Riot member Nadezhda Tolokonnikova, in a new telephone interview, has vowed to continue her political work once she has been released, and says that she knows she will not be released early, but submitted her parole documents just ‘to show that they cannot break a person’.  Konstantin Lebedev, an ally of opposition leader Sergei Udaltsov, says a clip that shows them plotting mass unrest with a senior Georgian politician is authentic.

Under a new law signed by Putin, media outlets that print swear words will face heavy fines – but the law gives no indication of which words are to be banned.  NGO representatives questioned Putin’s claim on German television that Russian NGOs had received $1 billion in foreign funding since the ‘foreign agent’ law came into force last year.  Putin had suggested that such a sum would be better spent ‘to help Cyprus’.  Russia’s corruption market is estimated to be worth $300 billion a year.  Mikhail Gorbachev has a piece in The Guardian describing his memories of and ‘ideological differences’ with Margaret Thatcher, who died yesterday.  RFE/RL has posted an archive interview with Thatcher following the 1991 Soviet Coup.  President Putin praised Thatcher as a ‘colourful’ politician.

PHOTO: A demonstrator holds up a picture depicting Russian President Vladimir Putin with rainbow circles on his face, during a protest by the gay community in Amsterdam April 8, 2013. REUTERS/Cris Toala Olivares