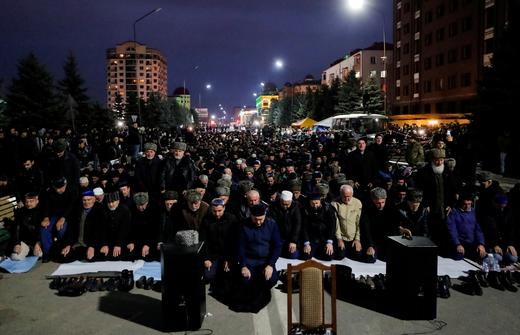 Responding to allegations made by the Dutch authorities, Foreign Minister Sergei Lavrov said that the four men accused of trying to hack chemical weapons watchdog the Organization for the Prohibition of Chemical Weapons (OPCW), allegedly on behalf of the GRU military intelligence agency, were merely on a routine trip to visit the Russian embassy. “It all looked like a misunderstanding,” he said. The Foreign Ministry has protested to the Netherlands over the expulsion of the men; the Kremlin argues that the allegations lack hard proof. Further information has cropped up regarding the two men accused of poisoning former spy Sergei Skripal: GRU officer Anatoly Chepiga was allegedly part of a key attack against Ukraine four years ago. The open source investigative team Bellingcat also found that the other man, Alexander Petrov, is actually Alexander Mishkin, a military doctor from Arkhangelsk. Suggestions that Russia deliberately tried to make the Salisbury case look farcical or bungled poses the risk of overlooking the face that “serious things going on at the moment and some of those are linked to Russian intelligence,” according to the BBC’s security correspondent.

Trust ratings for President Vladimir Putin have fallen 20 points this year, largely due to pension reform, to as low as they were before the annexation of Crimea (39% now, down from 48% in June, before the pension reforms were announced). “People believe that the state is trying to solve its problems at the expense of the population,” said Levada Centre head Lev Gudkov. Svetlana Alexievich remembers Anna Politkovskaya, who was murdered in her apartment building on October 7, 2006; she discusses some of the political and social changes since Politkovskaya’s death, notably the recent upsurge in Stalinism. Jailed Chechen human rights campaigner Oyub Titiev has been awarded a human rights prize by the Council of Europe.

Russia is challenging the US’ claims that it has fulfilled its START nuclear treaty obligations. Kremlin spokesman Dmitry Peskov says consultations are underway to get North Korean leader Kim Jong-un to Russia. “Russian sleeper agent, British mole, lunatic—nobody knows quite what to make of [Sergei] Kapchuk. However improbably, the 46-year-old bon vivant is now the poster boy for one of many Kremlin efforts to lure back as much as $1 trillion of Russian cash stashed abroad” (from Bloomberg). Ukraine, the United States and seven other NATO countries are holding large-scale air force exercises for the next twelve days.

PHOTO: People pray during a protest against what they say was an unfair land swap deal with the neighbouring Russian region of Chechnya, in Ingushetia’s capital Magas, Russia October 5, 2018. REUTERS/Maxim Shemetov