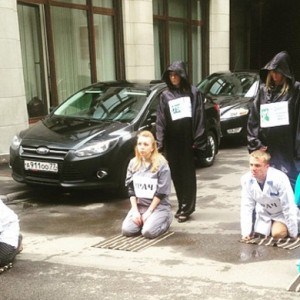 Due to the failure of the Kremlin’s favoured ‘conservative approach’, Russia’s AIDS epidemic will worsen considerably in the next five years, says one of the country’s top experts.  Vadim Pokrovsky argues that government’s family values based attitude has ‘led to the doubling of the number of HIV sufferers’.  Eight activists have been arrested in front of the presidential administration building in Moscow in a protest against the increasing cost of drugs for sufferers of the illness.  As double-digit inflation curbs spending, it is reported that almost 20% of citizens can now afford nothing more than the bare essentials.  The EBRD has warned that the recession is likely to last for two years and will hurt the economies of Russia’s neighbours in central Asia and the Caucasus.  Moscow is ‘surprised and disappointed’ that the bank has decided to suspend further loans to the country as a result of ‘temporary political trends’ (read: the conflict in Ukraine).  $400 million of losses were recorded in April among Russia’s banks, which, whilst not catastrophic, says this article, does indicate they have a difficult year ahead.

After lengthy negotiations, Putin’s personal intervention has been cited as a reason for the long overdue approval of a deal between the Indian Defense Ministry and Russian Helicopters on localised helicopter production.  Russia’s debut-making Armata T-14 tank can look forward to wielding a ‘massive’ new cannon, says an impressed Dmitry Rogozin.  Reports have surfaced from Israel that Egypt is to purchase Russia’s advanced S-300 air defense system.  Britain has scrambled military jets to escort Russian Bear strategic bombers out of its ‘area of interest’.

Paypal has suspended a Russian account opened to fund the widespread publication of Boris Nemtsov’s ‘Putin.War’ report on Moscow’s role in the Ukraine crisis, on the basis that it ‘does not offer the option of using its system to receive donations for political parties or political causes in Russia’.  Award-winning journalist Yelena Milashina of the Novaya Gazeta has been pulled from Chechnya in concerns for her safety, after she reported on a Chechen police officer’s plans to force a teenage girl to become his second wife.

PHOTO: Each protester involved in the demonstration against the rising costs of HIV/AIDS medication faces a fine of up to $400 or 40 hours of community service, OVD-Info reported. (instagram.com/godlevskaya)