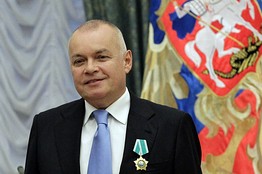 In a move widely interpreted as an attempt to reassert control of the media, President Putin has announced that agency Ria-Novosti will be dissolved and replaced with a new media outlet called Russia Today.   Ria-Novosti says this is apparently separate from the English language news channel RT, in an article announcing its own demise.  The head of the new agency will be arch conservative news anchor Dmitry Kiselyov, who gained notoriety for saying that homosexuals’ organs should not be used for transplants.  Kiselyov was interrupted in a recent appearance from Kiev’s Independence Square to be presented with an Oscar for broadcasting ‘nonsense and lies‘ about the mass protests by a Ukrainian journalist.  Journalist, gay parent and soon-to-be emigre Masha Gessen has warned that it is ‘completely unrealistic‘ to think that Russia will revise its stance on gay rights.  A new amnesty in connection with the 20th anniversary of the Russian Constitution will free around 25,000 prisoners from the most socially vulnerable categories of convicts.  Could this include Pussy Riot and the Arctic 30?

Eighteen managers from the company founded by Mikhail Khodorkovsky, Yukos, have been placed on an international wanted list for connection to a possible third large-scale embezzlement case against the company.  Whether Khodorkovsky himself will face these additional charges remains as of yet unknown.  A new survey among Russian bankers has found that money-laundering involving illegal profits from state contracts has doubled during the past year.  To little fanfare, Russia and Cuba have apparently signed an agreement to write off 90% of Cuba’s $32 billion debt to the Soviet Union, putting an end to a two-decade long dispute.

The cost of Gazprom’s South Stream project looks set to increase by almost 20%.  Surveillance concerns might see deputies forced to give up their iPhones in favour of  the Russian-made Yotaphone.

PHOTO: Dmitry Kiselyov, who will head the agency to replace Ria-Novosti, poses for a photo in October 2011 after receiving a medal of Friendship.  (Agence France-Presse/Getty Images)