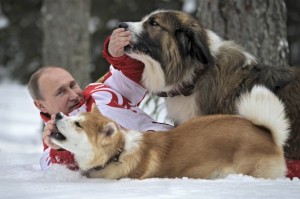 Corruption is, according to a new report by the National Anticorruption Committee, the most profitable business in Russia, with gains from corruption-related business totalling up to $300 billion dollars.  The committee’s head, Kirill Kabanov, believes that the punishment for those found guilty of corruption should be as severe as the punishment for treason.  Ex-deputy agriculture minister Alexei Bazhanov and two former agriculture company executives have been detained for allegedly siphoning away $35.5 million from a ministry-owned firm. Akhmed Bilalov, the former deputy head of the Russian Olympic Committee who was heavily criticised by Vladimir Putin is facing abuse of office charges.  Boris Kagarlitsky warns that the Kremlin’s euphemistic acknowledgement of a ‘pause in growth‘ masks financial free fall.  The Finance Ministry is hoping to milk the lucrative oil sector for funds by increasing taxes on oil production by 5% next year if it cannot solicit approval for other measures to raise revenue.

Foreign Minister Sergei Lavrov has told the press that Moscow and Washington are in accord over the North Korea situation.  The Kremlin has decided to lift a seven-year ban on Georgian mineral water Borjomi, popular among Russians as a cure for ailments.  The State Duma has passed in a first reading a Health Ministry sponsored bill which would outlaw the advertisement of abortion by medical services.  Russia will lend Serbia $500 million and has pledged to continue supporting Belgrade in its disagreement with Kosovo.  Russia’s largest steelmaker Evraz has failed to meet analysts’ forecasts, posting a net loss of $335 million in 2012 compared with net profit of $453 million in 2011, as a result of dwindling global demand for steel.

According to a new Levada Center poll, 55% percent of Russians would like to see Putin (seen here in a new photo shoot frolicking with his dogs) make an exit in 2018.  It seems that the President’s dalliance with biker gang Night Wolves has its downsides; it has led him to be accidentally blacklisted by Finland.  Finland’s Interior Minister Paivi Rasanen has now apologized for the error.