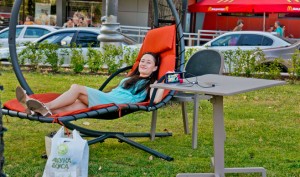 Having introduced a year long ban on half its agricultural imports from the West, Russia may negotiate a price control agreement with domestic food producers to stop speculative price increases that might have an impact on inflation.  Moscow’s fine-dining elite and its zoo animals are likely to suffer from the restrictions which will benefit alternative suppliers Belarus, Turkey and Brazil.  A threat that Australia will ban supplies of uranium have been rebuffed by Rosatom, which claims Russia has enough of the element for 100 years.  Russia has banned anonymous access to the Internet in public places; Bloomberg notes the irony in how Putin chose to introduce this measure.  The Moscow Times reports on a new kind of activism drawing attention to the nexus of wealth and power: ‘daching‘.  Chess master-turned-Kremlin critic Garry Kasparov has found himself up against the regime in his bid to win the presidency of FIDE.

Russia’s Union of Journalists is making great efforts to find photographer Andrei Stenin of the Russia Today news agency who has been missing in eastern Ukraine for the past three days.  Ukrainian government forces are reportedly on the cusp of recapturing rebel stronghold Donetsk from pro-Russia separatists, who on Saturday claimed they were ready for a ceasefire.  Vladimir Putin’s attempts to broker peace between Armenia and Azerbaijan over Nagorno-Karabakh have yielded little in the way of results.  Russia’s Northern Fleet’s anti-submarine force has ‘expelled’ a foreign submarine, presumed to be a U.S. Navy Virginia-class vessel, from the country’s boundary waters.

Whatever happens between Russia and Ukraine, the construction of South Stream gas pipeline will continue according to schedule, Austrian energy group OMV has reportedly asserted.  President Putin has welcomed ‘efficient international cooperation‘ as Rosneft and ExxonMobil begin their Arctic drilling.

PHOTO: Muscovites may not be able to enjoy the pleasure of convenient Wi-Fi Internet access in city parks much longer. (Vladimir Filonov / MT)