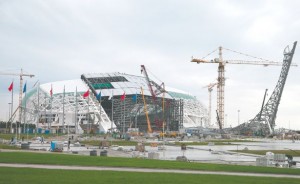 ‘Russian prison – that’s even more extreme conditions than the North Pole’: the words of Veronika Dmitriyeva, the wife of one of the 28 Greenpeace activists who are apparently facing inhumane treatment in pre-trial detention.  Human rights workers are petitioning for an upcoming amnesty on the 20th anniversary of the Constitution to extend to include the Greenpeace party.  They will certainly hope to see army veteran Mikhail Kosenko of the Bolotnaya square rally (described by Brian Whitmore as a potential ‘martyr hero‘ for the protest movement) freed from incarceration in a psychiatric hospital.  Kosenko’s imprisonment has been called ’emblematic of the use of psychiatry for political purposes.’  Thanks to a decision by the Constitutional Court to permit people previously convicted of ‘serious and very serious crimes‘ to run for public office, Alexei Navalny could return to the political stage.  This video demonstrates the manifold perils of protesting for LGBT rights in Russia.  Memorial activist Svetlana Gannushkina has received the 2013 Stieg Larsson prize for her ‘persistent and courageous work in the field of human rights in Russia’.

A new report has revealed the extent of income inequality in contemporary Russia: 110 Russian billionaires command 35% of the nation’s wealth, while the global trend shows billionaires accounting for 1-2% of total household wealth.  Apparently the state has no ownership records for almost 40% of the country’s real estate ahead of a property tax increase due to start next year.  Under Prime Minister Dmitry Medvedev’s orders, twice as many state companies will now be obligated to report their employees’ income and expenditures, although the figures will not be published.  Medvedev has also announced that Former Deputy Defense Minister Oleg Ostapenko will become the new chief of the trouble-prone Federal Space Agency.  On the subject of troubles – Sochi’s incomplete Olympic stadium has been branded a ‘disaster’.  Russian authorities may have apprehended notorious cyber criminal ‘Paunch.’

Ukrainian Prime Minister Mykola Azarov says Ukraine may cease all natural gas imports from Russia within the next few years if the current gas contract is not reexamined.  Trade apparently dropped by 25% between the two countries in the first part of the year.  Without Ukraine, ‘it will be difficult to build Putin’s new Eurasian edifice‘.  Lithuania’s Prime Minister Algirdas Butkevicius has echoed the belief that current Kremlin aggression towards neighbouring partners is spurred by concerns over encroaching EU influence.  In an ongoing trade dispute over Russia’s car recycling fees, the European Union has asked the WTO to intervene.

PHOTO: Workers walking on the grounds of Fisht Olympic Stadium near the Black Sea coast in Sochi on September 28, 2013. The venue remains under construction. (Stanislav Krasilnikov / ITAR-TASS)