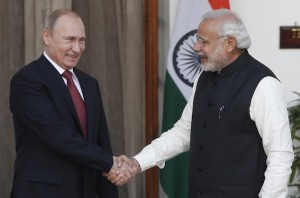 Vladimir Putin’s visit to India has yielded a deal in which Russia’s state-owned nuclear energy firm Rosatom will supply 12 nuclear energy reactors for India over 20 years.  The Russian Direct Investment Fund will work with an Indian partner to invest $1 billion in hydroelectric projects.  ‘It is good for a rich fiancee to have a beautiful bride […] But they should not promise you a marriage and then betray you‘ said a cautious Alexander Kadakin, Russia’s Ambassador to New Delhi, before the visit.  Russia has entirely written off $890 million in debts owed by Uzbekistan in an attempt to foster strong economic links between the nations; security matters and IS were also discussed on Putin’s visit to Tashkent.  The U.S. has accused Russia of violating two crucial arms-control treaties.  Former Soviet leader Mikhail Gorbachev believes a U.S.-Russia summit should be held to stop Moscow’s relations with the West disintegrating further.

Russia’s central bank is reportedly likely to raise borrowing costs to ensure financial stability as oil prices plummet and the ruble along with them.  The ruble’s floundering has seen Russian companies lose tens of billions on foreign-exchange derivatives.  The Moscow Times considers how the oligarchs are faring amidst the financial gloom.

Opposition activist Sergei Mokhnatkin, found guilty of assaulting two police officers during a protest last year, has been placed on a wanted list after failing to appear at his sentencing hearing in an assault case against him.  The Moscow School of Civic Education has become the 18th NGO to find itself on the federal register of ‘foreign agents’.  Time Magazine has named ‘imperialist’ President Vladimir Putin as its second runner-up to be 2014’s ‘Person of the Year’, behind Ebola fighters and Ferguson protesters.