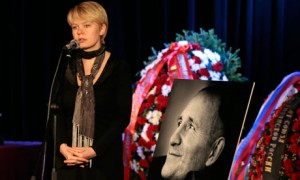 Activist Yevgenia Chirikova has described journalist Mikhail Beketov, who died as a result of injuries sustained in an attack five years ago, as ‘the backbone of Khimki’ at a ceremony at the House of Journalists to mark his passing.  The Independent describes the ‘heavy air of grim resignation’ pervading the ceremony.  ‘Why does Putin want to jail me? […]  It seems to me the logic is obvious: he and his circle must guard their power. […] They’ve stolen billions, they know people are outraged by this’: Alexei Navalny reflects on his possible jailing in the Guardian.  Writer Vladimir Voinovich has joined in the video campaign ‘One day, One name’ to support opposition activists jailed for taking part in the Bolotnaya Square protests of May 6, 2012.  Moscow’s Tverskoi district court has resumed the posthumous trial of whistle-blowing lawyer Sergei Magnitsky.  Russia’s non-governmental organizations have urged President Putin to provide evidence to substantiate claims that they have received nearly $1 billion from foreign sponsors.  Nils Muiznieks, the Council of Europe’s human rights envoy, has said that the new law impelling NGOs to register as foreign agents is having ‘a chilling effect.‘  Jailed Pussy Riot member Maria Alyokhina has apparently applied for early release.  The Kremlin is contemplating a new law protecting citizens’ religious feelings.  Billionaire-turned-politician Mikhail Prokhorov is concerned that secularism has been undermined by the Putin regime.

After months of wrangling over prices, Vladimir Putin has announced that Moscow will continue to lease Kazakhstan’s Baikonur space complex.  Marking Cosmonaut’s Day, the President announced plans to spend 1.6 trillion roubles on space-related activities between now and 2020.  Deputy Economy Minister Andrei Klepach has warned of lacklustre growth in Russia due to dwindling industrial output and investment.  Following the announcement of sharp losses by Evraz, steel major MMK has posted a fourth-quarter net loss of $141 million.  As part of plans to hasten privatization, the government is considering selling a 19% stake in state-controlled oil major Rosneft this year.  The Russian giant and U.S. counterpart ExxonMobil have revealed details of a $15 billion liquefied natural gas project to supply Asia-Pacific markets that could threaten Gazprom’s monopoly on Russian gas exports

According to Foreign Minister Sergei Lavrov, Moscow is ready to expand ties with Tbilisi, but will not revise its position on the breakaway states of South Ossetia and Abkhazia.