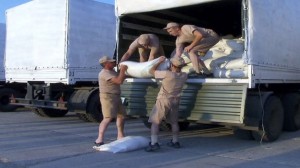 A Russian convoy of up to 280 trucks carrying humanitarian aid is reportedly heading for Ukraine, after Ukrainian authorities agreed to allow Russia and the Red Cross to deliver humanitarian cargo.  This comes after concerns from the West that delivering aid may serve as a pretext for military intervention; these fears are, it would seem, still alive at the European Commission and at NATO.  Moldova’s foreign ministry has urged Russia to withdraw its 1,500 troops and weapons from the separatist pro-Russian enclave of Trans-Dniester.  According to preliminary data, Russia’s GDP rose by 0.8% year-on-year in the second quarter.  Given that the average Russian spends a considerable 32% of their budget on food, the likely impact of the ban on Western agricultural imports is making life for the country’s own citizens harder, argues this op-ed.

Chess legend and Kremlin foe Garry Kasparov has been unsuccessful in his bid to win the Presidency of the World Chess Federation from the incumbent, Kremlin ally and ‘alien encounter’ witness, Kirsan Ilyumzhinov.  A new poll has found that one in nine Russians want to emigrate from the country, and of those, 47% were motivated by the chance of a higher living standard and better wages abroad.  Following on from Pussy Riot activist Nadezhda Tolokonnikova’s criticisms, RFE/RL examines work in prisons, which earns the Russian government about $1 billion a year.