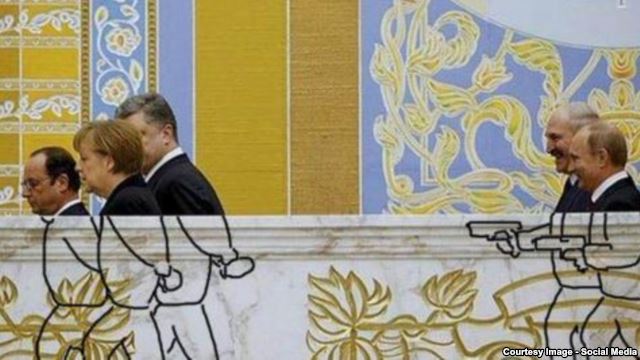 Under the agreement reached by the leaders of Belarus, France, Germany, Russia and Ukraine in Minsk yesterday morning, a ceasefire is due to begin in eastern Ukraine at 00.01 local time this Sunday night, with heavy weapons and foreign troops to be withdrawn, and all prisoners to be released.  The key issue of who controls Ukraine’s eastern border was not resolved, however, and no deadline was set for the withdrawal of Russian troops. U.S. Secretary of State John Kerry commented that both sides ‘have a long road ahead before achieving peace’.  Ukrainian President Petro Poroshenko notes that the talks failed to come to an agreement on autonomy for the rebel-held areas, and said that it will be difficult to enforce a ceasefire.  During an earlier break in the talks, Poroshenko had said that the conditions Putin had set were ‘unacceptable’.  President Vladimir Putin is widely seen as the biggest winner of the talks.  Putin said he was satisfied that the meeting adequately dealt with the situation, and that he felt there had been consensus on all sides.  The agreement will allow the Kremlin to keep exerting pressure on Ukraine’s leaders to stay away from the West, says Brian Whitmore.  The Economist agrees, saying that the Minsk agreement has not eased Putin’s ‘throttlehold on Ukraine’.  Russia launched military exercises in 12 regions yesterday morning, and, according to Kiev, sent tanks and armoured vehicles across the border during the Minsk meeting.

In an interview with The Independent, Rosneft head Igor Sechin called sanctions ‘absolutely illegal and illegitimate’.  Moscow city will spend $6.5 million on breaking up cloud cover over the city for the Victory Day celebrations on May 9, to ensure a sunny day.  An apartment belonging to the parents of Alexei Navalny’s associate Nikita Kulachenkov was searched by investigators.  The Democratic Republic of Congo currently has a better press freedom ranking than Russia.

A Russian photo showing an intimate moment between a gay couple has won the World Press Photo of the Year competition.

PHOTO: A popular photoshopped meme of an image taken during talks in Minsk between the Presidents of France, Germany, Ukraine, Russia, and Belarus.