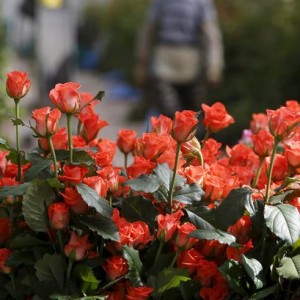 Russia has begun burning Dutch flowers, on the basis that they may be infected by insects, in what has been taken as a response to the Dutch investigation into the Malaysia Airlines Flight MH17 disaster.  The authorities also have an issue with Poland’s canned sprats.  Since it began incinerating embargoed products on August 6, Russia has destroyed a total of 480 tonnes of embargoed food of plant origin and 41 tonnes of products of animal origin.  President Putin has held an operative meeting with the members of the Russian Security Council to discuss increasing violence in Ukraine; reports from the port city of Mariupol suggest fighting has intensified.  A new poll has found that $354 a month should be a sufficient sum for the average Russian’s essential needs.

The ruble has fallen to its lowest rate against the dollar since February.  Are tensions developing in the Central Bank, which has just pulled the license of mid-sized Probusinessbank, as the economic contraction continues to challenge experts?  Despite the sliding ruble, in a $70 million-$100 million deal, German sportswear maker Adidas has purchased a warehouse outside Moscow, which Reuters describes as ‘a gesture of confidence in Russia’.

The Kremlin has decided to set up an annual human rights prize worth $93,000 to be awarded directly by President Putin as of 2016.  Rights groups says the move is an attempt to co-opt government foes.  The State Duma’s health care committee believes that a plan to impose mandatory HIV testing on couples who want to get married is ‘a reasonable proposal and should be supported’, as HIV rates increase.  A recently released survey by the Pew Research Center has found that most people around the world hold a negative view of both Russia and President Putin.  Foreign Minister Sergei Lavrov has been caught swearing (again).