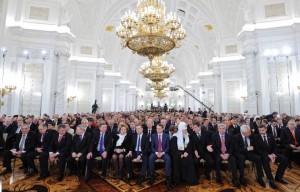 In a ceremony ‘full of pomp and circumstance‘, punctuated 34 times by applause, Vladimir Putin used his annual state of the nation address to lambast ‘genderless and fruitless so-called tolerance‘ as an attack on traditional values.  In an apparent dig at the U.S., Putin said that Russia is not ‘seeking a superpower status or trying to claim a global or regional hegemony … not trying to patronize or teach anyone.’  What Putin’s speech did not contain however were any references to the possible abolition of mayoral elections and regional legislatures, as had been rumoured beforehand.  The President did take the opportunity to comment on the nature of Russia’s defense industry, as well as vaunt the benefits of the Russia-led customs unions to Ukraine.  RFE/RL has some sardonic Tweet responses to yesterday’s speech, which also marked the twentieth anniversary of Russia’s constitution.

Regarding the economy, the President acknowledged that ‘the main reasons for the economic slowdown are not external but internal‘, targeting tax-dodging companies in particular.  This being the case, why has ‘so little […] been done‘ wonders former Finance Minister Alexei Kudrin.  Russia’s financial regulator has revoked the banking licenses of three mid-sized Russian banks, among them Investbank, Russia’s 84th largest bank by assets.  Despite his arrest on bribery charges, the former CEO of Rosbank, Vladimir Golubkov, will receive a $808,300 payout.  Tycoon Mikhail Prokhorov’s mining company has purchased a Canadian copper producer in a $100 million deal requiring the listing of the new firm’s shares in Toronto.

The European Parliament has passed a resolution calling on the E.U. Council of Ministers to mirror the U.S.’ Magnitsky sanctions.  Forbes, in the first of three-part series examining Russia’s ‘intensifying focus‘ on the Far East, looks at Russian relations with Vietnam.