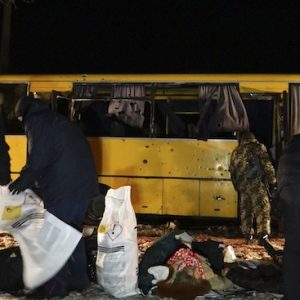 Twelve people have died in an attack on a passenger bus in an area controlled by militia of the self-proclaimed Donetsk People’s Republic, who have called it ‘a provocation on the part of Ukraine’.  Ukrainian President Petro Poroshenko has blamed the assault on the DPR’s forces.  The Moscow Times offers highlights from the Gaidar Forum, where experts gather to discuss the future of Russia’s unhappy economy.  As oil prices have hit new lows, the ruble has also sunk to its lowest point so far in 2015.  $45.9 billion will disappear from Russia’s budget this year if oil trades at $50 per barrel, says Finance Minister Anton Siluanov.  An optimistic Deputy Economic Development Minister Alexey Vedev hopes that oil prices will reach around $60-80 per barrel this year.  A realistic Economic Development Minister Alexey Ulyukayev says it is highly likely that the Standard&Poor’s international agency will downgrade Russia’s sovereign rating, which could see the country lose between $20 billion and $30 billion.  In a new report, the World Bank has downgraded its expectations for Russia’s economy in 2015, predicting that the country’s GDP will fall by 2.9%.  But still, at least this is not as bad as 2009, says Andrei Klepach, who has warned that inflation might reach 11% in 2015.  Slashing expenditure is a must, said Finance Minister Anton Siluanov, though military spending will remain untouched.

Images of a child militant allegedly working for the Islamic State, executing two men who are purportedly FSB agents, have emerged on social media.  Foreign Minister Sergei Lavrov, in an implicit dig at the West, has called for a ‘more serious’ fight against IS.  Russia’s media watchdog has warned Russian media against ‘fanning sectarian tensions in Russian society’ by republishing Charlie Hebdo cartoons that depict the Prophet Muhammad.  The charges held against the Navalny brothers have been contested by the public prosecutor as ‘too lenient‘.

The Health Ministry has denied reports that transvestites and transsexuals could lose their rights to drive in Russia as a result of a new road safety decree which bars individuals with psychological or behavioural disorders from taking the wheel.  Reducing traffic accidents is indispensable for the country’s socio-economic development, says this comment piece.  Might Mikhail Prokhorov have had his fill of basketball?

PHOTO: Investigators work at the site where a passenger bus was damaged by shelling, at a checkpoint of the Ukrainian forces in the village of Bugas, near the town of Volnovakha in Donetsk region, eastern Ukraine on Jan. 13, 2015. (Nikolai Ryabchenko / Reuters)