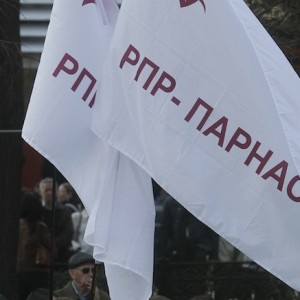 Prime Minister Medvedev has named four more countries to be added to Russia’s import ban list for foreign food: Albania, Montenegro, Iceland, and Lichtenstein.  Ukraine may well be next, the Prime Minister warned, if it pursues the economic parts of its Association Agreement with the European Union.  Georgia, despite implementing some measures against Russia, is not on the list, since the measures remain insignificant.  Only 15% of Russians are in favour of the destruction of smuggled food products; almost half have negative feelings about the matter, says a new Levada poll.  The Central Elections Commission, despite a recent flurry of crackdowns on oppositions candidates in local elections, has affirmed that opposition party Parnas can take part in upcoming regional elections in Kostroma.  A new survey has found that for most Russians, freedom of speech is less important than religious feelings, tolerance and civility.  An incident which saw the sister of supermodel Natalia Vodianova, who suffers autism and cerebral palsy, being asked to leave a cafe, has been seen by some as typical of the attitude held towards the disabled in Russia.

As the Kremlin attempts to wield greater influence in the war in Syria, Foreign Minister Sergei Lavrov has held talks with a delegation of the main Syrian opposition group, the Syrian National Coalition, in Moscow.  The Foreign Minister’s inadvertent swearing outburst, is, Brian Whitmore says here, the latest evidence that ‘the wheels are coming off the Putin machine’.  Russian citizens should apparently brace themselves for more financial gloom.  The Central Bank holds by its belief that capital controls are ‘counterproductive’.

Crimea might be Russia’s newest prized possession, but for its citizens, political isolation remains a dominant feeling.  The Economist examines the vagaries of the Russian justice system, when it comes, in particular, to foreigners.

PHOTO: Parnas will be able to stand in the elections in Kostroma, but since the election campaign is already under way, the initial ban means Parnas will have less time on the streets than other parties.  (Andrei Makhonin / Vedomosti)