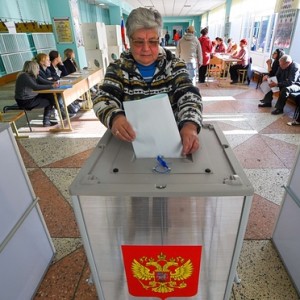 TODAY: Multiple violations reported in regional elections; NGO office raided in Kostroma where Parnas claims to have reached 5% of the vote; authorities contest; Russia will continue to supply Assad with weapons; observers ponder reasons for escalation of Moscow’s involvement in Syria; ceasefire in Ukraine holding; Elton John wants to tell Putin how he feels about gay rights in Russia.

Independent election watchdog Golos has noted more than 1,500 violations during Sunday’s local and gubernatorial elections, in stark contrast to the Central Elections Commission’s report of a mere 60 complaints during the entire election campaign in 2015.  Golos found the highest number of violations in the Kostroma region, the only place where the main opposition Democratic Coalition was allowed to participate.  This is also where police raided the office of independent vote monitors and confiscated $30,000 from an activist of the Open Russia nongovernmental organisation, on the basis it was to be used to pay ‘radical youth groups who were planning unlawful actions’ during voting.  Opposition party Parnas claims to have won 6% of the vote in Kostroma, giving it enough to secure a seat in the regional parliament for candidate Ilya Yashin.  State pollster VTSiOm meanwhile says its exit poll showed that Parnas only reached 2.6%.  The Washington Post reports from the village of Galich where loyalties to Putin remain strong.  According to a new World Bank report, women in Russia are disbarred from 456 types of job on the basis of their gender, the highest rate in the world.

As reports surface of Russian forces expanding the tarmac of a major airport in Syria’s coastal province of Latakia, a stronghold of President Bashar Assad, Foreign Minister Sergei Lavrov has asserted that Russia will continue to provide military supplies to Syria, despite warnings against such action from Washington and the Gulf States.  German Chancellor Angela Merkel has argued that Germany and other Western European powers should work with Russia as well as the U.S. on solving the crisis in Syria.  There is evidence, some argue, that Putin’s dogged support of Assad may waver, if it interferes with his primary aims of defeating Islamic State and maintaining influence in the Middle East.  The escalation of involvement in Syria has more to do with domestic propaganda aims than geopolitics, argues this op-ed.  Or is it to serve as a distraction from ‘internationally condemned’ aggression in Ukraine?

German Foreign Minister Frank-Walter Steinmeier has announced that ‘significant progress‘ was made towards a resolution of the conflict in eastern Ukraine in talks on the weekend with French, Russian, and Ukrainian counterparts.  Putin has described as ‘heartening’ the fact that shelling in Donbass has ceased, in what has been seen as softening rhetoric.  Ukrainian President Petro Poroshenko maintains that ‘there will never be friendly relations while Ukrainian soldiers and civilians are killed by Russian weapons’.   Pop legend Elton John has expressed an interest in meeting Vladimir Putin to advocate for gay rights.

PHOTO: A woman casts his ballot for Russian regional elections at a polling station in Kostroma. (Dmitry Serebryakov/AFP/Getty Images)