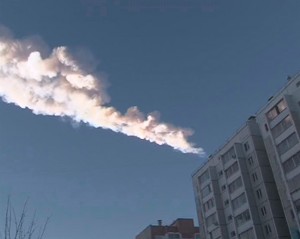 A meteorite has exploded in the region of Chelyabinsk causing widespread shattering of glass and the collapse of a zinc factory roof.  Estimates of the number of people seeking medical treatment varies from 100 to 400 people.  A video of the meteorite, or meteorite shower, as the media remains unsure, which flared brightly, can be seen here.  Nuclear sites were, apparently, unaffected.  The meteorite ended its trail of destruction when it plunged into a lake.  The Investigative Committee has charged Georgian deputy and Saakashvili ally Givi Targamadze in absentia with plotting opposition riots.  The Committee to Protect Journalist’s new ‘risk list’ has highlighted Russia as one of the 10 countries manifesting the ‘most significant downward trends’ during 2012.  At a meeting with the FSB, President Putin has warned foreign-funded non-government organizations (and Hillary Clinton, via a veiled reference) against interfering in the country’s affairs.  Russia is showing some signs of relenting on U.S. meat imports; meanwhile its ban on imports of chilled German meat has been lambasted by the E.U. as ‘unjustified and disproportionate’.

As Moscow prepares to host a two-day G20 financial summit, ‘there is an irony in it being one of the least trusted investment destinations of its peers, at least as reflected by prices and demand’.  President Vladimir Putin has taken Yevgeny Dod, the CEO of state-owned company Rushydro, to task for the questionable distribution of contracts during the construction of the Zagorskaya hydropower plant.  Ethics commission chief Vladimir Pekhtin has requested time off during the probe into allegations made by Alexei Navalny that he owns luxury real estate in the United States.  Brian Whitmore considers how the era of Medvedevian modernization has been put to bed by Vladimir Putin.  The Qatar Investment Authority is currently negotiating the acquisition of a $3 billion stake in state lender VTB.

Rosneft will pay $1.1 billion to the Venezuelan government for the opportunity to participate in a joint oil extraction venture in the country’s Orinoco river basin.  The energy giant has also signed an agreement with ExxonMobil allowing the U.S. company exploration access to an additional 606,000 square kilometers in the Russian Arctic.

German doctors are apparently confident they can save the eyesight of wounded Bolshoi ballet director Sergei Filin.  Two American bloggers, who prefer to remain anonymous, have paid homage to Putin’s action man antics with a series of ‘Vladentines’.

PHOTO: The trail of a falling object is seen above a residential apartment block in the Urals city of Chelyabinsk, February 15, 2013. (Reuters)