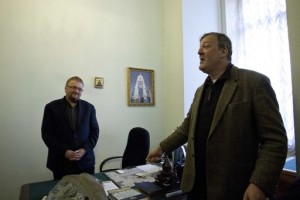 The openly gay British actor Stephen Fry has interviewed Vitaly Milonov, the author of St. Petersburg’s controversial gay propaganda law, as part of a documentary about gay people’s experiences around the world.  He commented: ‘Milonov doesn’t seem to believe there are teenagers bullied and tormented for being gay, he thinks they make it up’.  Recently ousted from the A Just Russia party, Gennady Gudkov responded that he would create a new social democratic party if the ouster is not reversed.  His son Dmitry, who was also expelled from the party, may be investigated in connection with a recent trip to the U.S., where he spoke at a forum for the rights organisation Freedom House.  Federation Council Senator Vitaly Malkin is the latest official to be targeted by Alexei Navalny for unethical behaviour, with the latter alleging that he owns 111 condominiums in Canada.  In an interview with the BBC, Foreign Affairs Committee chairman Alexei Pushkov defends Russia’s warning to the U.K. against arming the Syrian opposition: ‘You cannot make a wall between the moderate armed opposition and the extremist armed opposition, they are on the same side’. He also says that relations between Russia and the U.K. are ‘definitely getting better’, and slams the U.S. as the ‘biggest loser’ in the Iraq war.  His comments come on the second anniversary of the start of the Syrian conflict.

Russia’s Catholic community has extended its congratulations to Pope Francis, with President Vladimir Putin saying he hopes that ties between the Vatican and Russia will continue to develop around ‘the Christian values that unite us’.  Patriarch Kirill also expressed hope that relations between the Catholic and Orthodox Churches would continue to develop positively.  Russian fund managers are speculating about whether Gazprom will receive a new chief executive, saying that such a move could boost the company’s stock price.  Novatek will pay over $100 million for the license it won to explore the East-Tazovskoye field in the Arctic.  Former Finance Minister Alexei Kudrin says that the economy could be diversified with strong political will and a willingness to ‘liquidate full and complete dependency on the energy sector’.

Vladimir Putin says that the removal of wrestling from the Olympic program is ‘unjustified’.  The Federal Space Agency has formally agreed to join forces with the European Space Agency on a $1.8 billion project to explore Mars.  The inquest into the death of Alexander Litvinenko has been postponed for five months, until October.