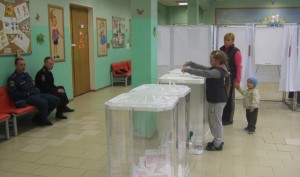 United Russia candidates have reportedly shown a strong performance in the regional elections which were held yesterday.  Whilst the Central Election Commission claimed it had received no complaints throughout the day, the leader of St. Petersburg’s branch of the A Just Russia party, Oksana Dmitriyeva, has announced that her party would not recognise the results in the city on the basis that the elections were not free.  Yabloko leader Sergei Mitrokhin has indicated that his party might follow suit in the case of the Moscow City Duma.  Golos has received 656 complaints of electoral violations in the polls which also had a low turnout; the Moscow Times estimates 15-20% attendance.  At 45%–60% (depending on which source you use) turnout was considerably higher in Crimea, whose first ever vote in a parliamentary election since the reunification with Russia in mid-March saw United Russia apparently glean 70% of votes.  Reports of pressure to vote for the party of power have emerged in the case of newly absorbed region.

The U.S.’s new round of sanctions against Russia will hit Gazprom, Gazprom Neft, Lukoil, Surgutneftegas and Rosneft, in a move which would imperil joint explorations of Russia’s Arctic.   The EU’s extended sanctions mean that a total of 119 people now face asset freezes.  In an analysis of the extended sanctions, economist Sergei Guriev argues: ‘It’s not going to be catastrophic in the near future, but in the longer run it’s very bad news‘.  An energy ministry official has warned that further Western sanctions could lead to gasoline shortages.  The ministry of economic development expects a 4% decrease in oil exports in 2015.  As a result of sanctions, the Russian ruble is trading at a new low against the US dollar.  It has been reported that the government will establish a multi-billion dollar anti-crisis fund in 2015 using money diverted from the Pension Fund and some left over in this year’s budget to assist companies affected by sanctions.  It has also announced plans to fund a $13 billion railway track that would bypass Ukraine.  In the country’s east, there is evidence of calm in Lukansk, but reports of ongoing clashes in Donetsk.

As of this week, Moscow will have its own Russian Orthodox radio station called Faith.  Human Rights Watch has released a new report in which it finds that nearly 30% of all children with disabilities in Russia face neglect whilst living in parlous conditions in state orphanages.

PHOTO: A family voting together under the watchful eyes of law enforcement authorities in Moscow on Sunday, September 14, 2014. (Igor Grishin / MT)