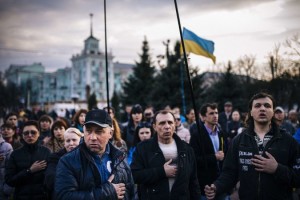 ‘The country is on the threshold of a civil war‘: Prime Minister Medvedev’s Facebook comment on Ukraine, one example of what the New York Times has called Russia’s ‘extraordinary propaganda campaign‘ of ‘misinformation, exaggerations, conspiracy theories […] and occasionally, outright lies’ about the crisis. Reports of escalating conflict are to be found elsewhere as the Guardian states ‘Ukraine is on the verge of major armed conflict‘.  The latest events have seen government forces launch their first significant military action in Kramatorsk, which they have apparently recaptured from a pro-Russian group after a shootout which claimed 11 lives.  Pro-federalist fighters are reportedly stepping up their campaign in the city.  Ukrainian units have also assembled in the city of Slavyansk with the aim of regaining control of it from armed pro-Russian groups.  President Putin has decried the moves of the Ukrainian government as ‘anti-constitutional acts‘ in a phone call to the U.N. secretary general, Ban Ki-moon, criticisms seconded by Foreign Minister Sergei Lavrov.

Though furiously rejected by Moscow, many observers (including Ukraine’s security service, the SBU) claim there is evidence of Russian involvement in Eastern Ukraine.  NATO head Anders Fogh Rasmussen is among them, having told reporters, ‘we never … comment on intelligence, but I think from what is visible, it is very clear that Russia’s hand is deeply engaged in this’.  U.S. Representative Mike Rogers has accused the Kremlin of a campaign of ‘sabotage‘.  Four-party talks between Ukraine, Russia, the U.S. and the E.U. due to be held in Geneva tomorrow will go ahead, says Foreign Minister Sergei Lavrov.  Russia’s foreign ministry has taken umbrage at the OHCHR’s report on the human rights situation in Ukraine which it calls ‘one-sided, politicized and biased‘.

The Finance Ministry may have to relinquish hopes to maintain budget discipline as rainy day funds may be withdrawn to fund newly absorbed Crimea.  Meanwhile Finance Minister Anton Siluanov is predicting zero growth for the country’s economy in 2014.  Russian stocks trading in New York sank for a fourth day as concerns about Ukraine mount.  Rising vodka prices have prompted an expansion in the black market which accounted for more than half of the entire vodka market in 2013.  China’s Sinopec will pay Lukoil about $1.2 billion to take control of its assets in Kazakhstan.

PHOTO: Singing the national anthem at a pro-Ukrainian rally on Tuesday, April 15, 2014, in eastern Luhansk, where ethnic Russians are the majority. (Dimitar Dilkoff/Agence France-Presse — Getty Images)