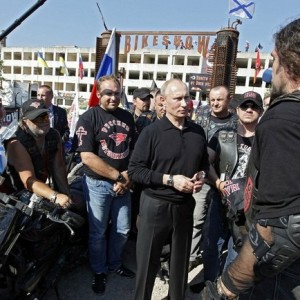 From little green men to fairytale dresses, Bloomberg offers a guide to the themes of President Putin’s annual televised Q+A, which takes place today.  Expect the expected, if the comments of the President’s spokesman are anything to go by: ‘Judging by the questions, in general Russians want the president to pursue a more hard-line policy course, consistently directed at defending national interests.’  Official income declarations have shown Putin and Prime Minister Medvedev both earning twice as much income for last year as they did in 2013, in accordance with a rise the President instated in 2014.  Both, however, slashed their pay by 10% last month amid the country’s financial turmoil, which looks likely to force hundreds of Russian banks to close or merge.  With low oil prices a significant factor, Russia has been holding active, ‘unprecedented’ consultations with OPEC, but is reportedly not considering cutting production.  As the prospect of sanctions being lifted beckons, Lukoil has reopened its office in Iran.  Russia has called Canada’s decision to send 200 military trainers to Ukraine, at the request of the Ukrainian government, as ‘counterproductive and deplorable’.  Hybrid warfare is Russia’s preferred approach to modern conflict, notes former NATO secretary general Anders Fogh Rasmussen, and it is being executed far more effectively than the West thinks.  This comment piece also highlights the breadth and scope of Russia’s ‘intelligence offensive’.

One day before its release, the Kremlin has banned Child 44, a Hollywood thriller set in the post-World War II Soviet Union from theatres, on the basis that it film falsifies history, and at a sensitive time, given that it is just weeks until the 70th anniversary of the victory over Nazi Germany.  Russia’s Culture Minister has complained that the movie presents ‘not a country, but a Mordor, with physically and mentally inferior subhumans’.  Poland has voiced concerns about plans for Putin-sponsored biker gang the Night Wolves to ride through Poland on a journey to Berlin to mark Victory Day.  Plans to ressucitate Soviet-era work camps for the treatment of drug addicts have been met with criticism by addiction experts.

The Siberian Environment Center, a charity which receives funds from Dutch and U.S. organisations, has been fined $6,000 for failing to label itself a foreign agent.  A district court has ruled that Sochi-based environmental activist Yevgeny Vitishko does not deserve early release from jail.  The house arrest of Konstantin Yankauskas, an associate of Kremlin foe Alexei Navalny accused of fraud and electoral violations, has been extended.  After a gay man asked the Russian speaking version of Siri how to register a gay marriage in England and was greeted with the response ‘I will pretend I didn’t hear that’, Apple has stepped in to fix the homophobic bias many users have noted in the Russian edition of the programme.