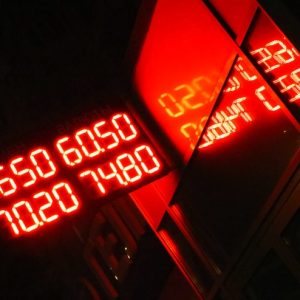 In a dramatic move to halt the free fall of the rouble (which has now earned the title of the worst performing currency this year, performing worse than even Ukraine’s hryvna) the central bank has raised interest rates by 6.5 percentage points to 17%.  This is the biggest interest rate hike since 1998, a year of major financial turmoil for Russia.  What will the results of ‘judgment day’ for the rouble be? wonders Reuters.  ‘The cost of 17% interest rates, if sustained for long, is the destruction of a large part of the domestic economy’.   Former Finance Minister Alexei Kudrin has approved the move as ‘necessary and correct‘.  A Bloomberg article describes the decision as a ‘standard approach deployed with mixed results in recent decades‘.  Mixed indeed: whilst the ruble initially rebounded somewhat after the measure was announced, it is now reportedly continuing to slide as oil prices decrease again.  The BBC notes that the move could ‘reinforce investors’ fears that the government is increasingly desperate and powerless in the face of a market tsunami’.  Whilst the international media is awash with news of the ruble’s decline, Russia’s TV channels are focusing their attention elsewhere, seemingly to ‘avoid fuelling panic‘.  And if the interest rate hike doesn’t work? Possible scenarios are introducing capital controls, or even seeking an IMF bailout.   The Central Bank has acknowledged that the economy would shrink in the first quarter of next year and perhaps by around 4.5% in 2015 overall if oil prices average $60 a barrel.  Russia’s industrial output is also suffering from the currency crisis.

U.S. President Barack Obama is apparently undecided on whether he will back a bill authorizing more sanctions against Russia.  Russia says it has seen a seven-fold increase in reconnaisance missions by U.S. and NATO aircraft near its border on the Baltic Sea since April.  President Putin ordered snap military exercises in the Kaliningrad region earlier this month.  Foreign Minister Sergei Lavrov says that Moscow hopes Ukraine will implement constitutional reform which would accord greater autonomy to Russian-speaking eastern regions that would remain under central control.  Lavrov has also asserted that Russia has the right to deploy nuclear weapons in the Crimean peninsula.  Thanks mostly to Russia’s military modernisation drive, arms makers’ sales grew by 20% in 2013.  In a sign of fraying international ties, Russian state space agency Roscosmos has announced it is considering building its own space station.

Police in Novosibirsk have detained two men suspected of assaulting local journalist Yevgeny Mezdrikov, the editor of online news site Tayga.info.  Human Rights Watch has warned that Russia is failing to protect victims of homophobic hate crimes.  Yury Shutov, a critic of Vladimir Putin in the 1990s, has reportedly died of a heart attack in prison, aged 68.