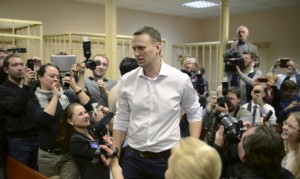 The head judge in the case against opposition leader Alexei Navalny, which began today in the city of Kirov, has reportedly acknowledged that it would be ‘an extraordinary event‘ if he were acquitted.  Ria-Novosti was offering live updates on the trial, until it was announced that it will be adjourned until April 24 at the request of the defense lawyers.  Protest leader and one time Deputy Prime Minister Boris Nemtsov is among those who have travelled to Kirov to show support for Navalny.  Brian Whitmore says of the case, ‘Like the prosecution of Yukos CEO Mikhail Khodorkovsky a decade ago, it has the potential to be an era-defining event‘.  Bloomberg wonders what effect the trial will have on investor confidence.  Former deputy Vladimir Pekhtin,who came under fire for Miami property holdings, has found himself a comfortable new role on the board of RusHydro.  Ksenia Yudaeva, President Putin’s representative to the Group of 20 nations, contextualises the ‘significant slowdown in the Russian economy’.  Putin has tasked Prime Minister Dmitry Medvedev with devising steps to encourage growth.

Investigators have apparently conducted a search on the offices of Russia’s largest social network VKontakte.  A regional NGO, the Kostroma Public Initiatives Support Center, has become the latest organisation to be investigated for failing to register as a ‘foreign agent‘.  The State Duma has passed a bill that would significantly alter the current parliamentary electoral procedures (in favour of the pro-Kremlin parties, say critics) in a first reading.  In the event of his arrest in absentia, Hermitage Capital chief William Browder will be put on the international wanted list.

President Putin has expressed his condolences and offered assistance in a U.S. investigation into the bomb blasts that killed three people at Monday’s Boston marathon.  The authorities have pledged to introduce tougher security measures at the world athletics championships to be held in Moscow this summer.  Investigators have opened a criminal case against a Russian orphanage director accused of exploiting teenagers in her charge as unpaid manual workers.  The Investigative Committee has also opened a criminal case over violence against a young Russian girl in a U.S. foster family.