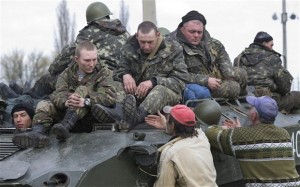 President Putin’s annual live Q+A session which takes place today is expected to focus upon Crimea, other issues surrounding Ukraine and high housing bills.  Yesterday’s reports that Ukrainian forces had recaptured parts of the Donetsk region are being denied: the Independent reports that Ukrainian APCs were seen flying Russian flags. ‘Kiev’s military intervention has had no success‘.  Dmitry Peskov, President Putin’s press secretary, maintains that there are no Russian troops in eastern Ukraine.  The Guardian states that armed men ‘made little secret of the fact they took orders from Moscow. Many of them appeared to be Russian troops from Crimea‘.  Ukraine’s interior minister says three pro-Russian protesters have been killed near Mariupol in eastern Ukraine.  Can diplomacy save the day? wonders the Telegraph as four-party talks begin, while expectations for the talks remain low.  ‘You can’t send in tanks and at the same time hold talks’: Foreign Minister Sergei Lavrov voices his complaints.  Professor Valery Solovei examines the way in which the media shapes Russian perceptions of the Ukraine crisis here.

Is barring Russia from international financial markets the biggest leverage the West has in the Ukraine crisis?  Moscow shares have recovered somewhat today in anticipation of the Geneva talks.  Russia has threatened to take the U.S. to the World Trade Organisation over sanctions imposed as a result of the Ukraine crisis.   A contraction of the Russian economy is likely if the U.S. and the European Union impose further sanctions.  Gunvor’s Gennady Timchenko is apparently already trying to avert the pinch of sanctions. Bloomberg traces the history of Bank Rossiya from Communist shell to teaming conglomerate.

Turkey has said that it will allow Russia’s controversy-courting South Stream pipeline, which would transport gas via the Black Sea into Europe, to pass through its territory.  The Kremlin’s war on the protest movement has apparently now begun targeting the humble placard.  The FT examines Putin’s increasing authoritarianism in the spheres of culture and education.

PHOTO: A Ukrainian Column of armoured personnel carriers was brought to a halt by Pro-Russian activists near the village of Ivanovka, north of Donestk (DAVID ROSE).