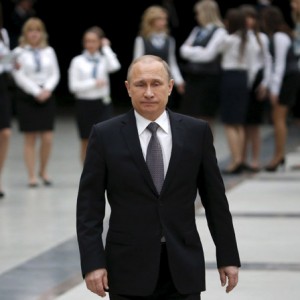 Trailed on TV with a Hollywood blockbuster style promo video, and the promise ‘the enemy will not pass’, President Putin’s annual televised Q+A session followed a familiar script: 74 questions in an almost four-hour long session, touching upon relations with the West, the situation in Ukraine, the economy and a spattering of ‘quirky’ queries – RFE/RL’s live blog covered the points as the came up.  The President told viewers that Moscow was not trying to ‘resurrect the empire’ but would never be a ‘vassal’ of the United States, which wishes to impose its mode of governance.  This, the President acknowledged, was a practice adopted by the Soviet Union after World War Two, ‘and there’s nothing good about it’.  When asked about who Russia could count as allies, he invoked Alexander III, saying, ‘Russia has just two allies, the armed forces and the navy’.  The President flatly denied there are any Russian troops in Ukraine and asserted that regarding Donbass, the citizens themselves would decide their fate.  ‘The overall tone was Putin’s trademark stance of suggesting that he personifies the will of the Russian people, whom he understands wholeheartedly,’ says the Moscow Times.  Putin called the murder of opposition politician Boris Nemstov, ‘tragic and shameful’ but deflected a question about why suspects in Chechnya were not being interviewed.  The President was sanguine on the economy, suggesting growth could return within two years, and choosing to rebuff former Finance Minister Alexei Kudrin’s question (‘what are you ready to do to create a new model of growth?’) with the contestation that ‘to build economic policy competently, a brain is definitely needed. But if we want people to trust us, a heart is needed, too’.  The Washington Post notes, ‘his main message was that the gravest challenges are over and the slumping economy will be back on track soon’.

Whilst the Q+A was underway police were searching the Moscow offices of Open Russia, the pro-democracy initiative founded by exiled Kremlin critic Mikhail Khodorkovsky, apparently looking for materials for a protest rally which the organisation says it had no plans to attend.  The new lawyer of Zaur Dadayev, the main suspect in the murder of opposition leader Boris Nemtsov, has told reporters that his client is changing his alibi and revising his account of the events that followed his arrest.  The graffiti artist behind a mural depicting Yury Gagarin being crucified which appeared on Orthodox Easter is looking at up to a year in prison for insulting religious beliefs.  Artist Pyotr Pavlensky, famous for nailing his testicles to Red Square, is facing new vandalism charges for a performance last year in support of Ukraine’s pro-European protesters.  Mary Dejevsky in the Guardian unpicks the reasons for Russia’s ban on Child 44, which she sees as more than knee-jerk Spalin apologism.

During his phone in, President Putin stated that Russia would not impose any penalties against France for its failure to see through the Mistral warship deal.  The President also cited Iran’s ‘great flexibility’ in talks with world powers on its nuclear program as a factor in its decision to lift a ban on supplying Iran with surface-to-air S-300 missiles.  Russian authorities have blocked a number of online guides to giving and receive bribes through electronic fund transfers ‘safely’.