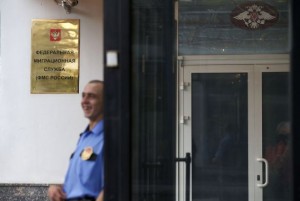 Anti-Putin agitators Pussy Riot have released a new video, the first since the jailing of three of its members on hooliganism charges last year.  In a trademark high energy caustic performance, which can be seen here, they compare Putin to ‘an Ayatollah in Iran‘ and describe Russia’s energy industry as a ‘red prison’.  On the matter of the energy elite’s vast wealth, Gazprom CEO Alexei Miller’s new customised tablet may cost up to $3.7 million.  On a visit to the Sakhalin-1 platform, Rosneft President Igor Sechin has communicated to Vladimir Putin his belief that colossal reserves are to be discovered in Eastern offshore zones, which could service Asian demands.  As anticipated, Russia has vetoed the creation of the world’s largest ocean reserves off the coast of Antarctica, by questioning the legal mandate of the organisation hoping to create it, in what campaigners called a ‘bad faith stalling tactic’.  Around 3,000 people have gathered in Yaroslavl to show solidarity with opposition Mayor Yevgeny Urlashov, who was arrested on corruption charges last Friday.  Moscow’s Central Election Commission chairman says anti-corruption blogger Alexei Navalny will be officially registered as a candidate for Moscow mayor today.  The verdict in his embezzlement trial is expected tomorrow; there are some concerns about what a guilty verdict would mean for Russia’s financial markets.

US whistleblower Edward Snowden has applied for temporary asylum in Russia, with his lawyer telling Russian state television that he fears for his life and security.  According to Putin’s spokesman, whether asylum will be granted ‘is an issue not for the president but for the Federal Migration Service‘.  Washington has reiterated its request that Moscow expel the fugitive, who is wanted on espionnage charges, ruling that he is ‘is not a human rights activist‘ nor ‘a dissident’.  Putin has moved to calm fears over bilateral relations, telling the media that ties between the two nations are more important than ‘squabbles of intelligence services.’

Whilst the run-up to the Sochi Olympics has certainly attracted concern about conditions for site workers, the BBC now has a special video report on whether over the past five years workers in Kazan have been exploited in order to create facilities for the  Universiade – or World Student Games – currently underway.