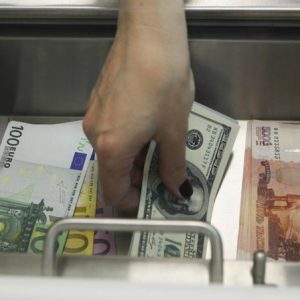 It seems that the Central Bank’s decision to increase interest rates was not enough to counter the plummet of the rouble yesterday which hit a new all-time low against the dollar.  The day saw the currency’s fall reach 20%, the largest one-day currency movement since the financial crisis of 1998, compounding the 10% drop of the previous day.  Shares in Russia’s biggest bank, Sberbank, fell more than 18% on what has now been dubbed Black Tuesday.  Amid widespread gloom, Mary Dejevsky says that ‘if the government and Central Bank between them can retain public confidence, it is possible that Russia’s exchequer will be able to ride out the crisis‘.  Sputnik’s Financial Editor says, ‘It could be worse. In 1998 the ruble fell from 6 to 30 rubles per dollar, which is 5 times cheaper than what it was before. So today there’s still room for it to fall to 150 rubles per dollar‘.  Central Bank chair Elvira Nabiullina advises Russians ‘to learn to live in a different zone‘.

Vladimir Putin’s spokesman says the president has no plans to address the public on the matter of the currency crisis.  The President (whose popularity is in no doubt, despite the gloom) has ventured opinions on who is to blame however – speculators and the West, apparently.  Sentiments echoed in an RFE/RL vox pop in Moscow which finds citizens pointing the finger at everything from ‘falling oil prices’ to ‘stupid Americans’.   Whilst U.S. President Barack Obama is expected to sign legislation instituting new sanctions on Russia by the end of the week, U.S. Secretary of State John Kerry has praised the Kremlin’s constructive moves in Ukraine in recent days, which if continued could see sanctions lifted.  Whilst food prices in Russia have increased by 20 to 25% since the beginning of the year, prices of some consumer durables have not increased as rapidly as the value of the rouble has fallen, meaning many Russian are investing their roubles in resalable goods.  Is OPEC to blame for Russia’s woes?  Or were the seeds of the crisis planted in the ‘unusual deal involving the bonds of Russia’s biggest oil company, Rosneft’ as Sergei Guriev suggests?  The oil giant’s CEO Igor Sechin says that the Russian government will support at least two out of Rosneft’s seven projects for financing from the National Welfare Fund.  The Moscow City Court has rejected a complaint filed by Axel Springer Russia, which publishes the Russian edition of Forbes which Igor Sechin is suing for defamation.  Russia will file a claim with the UN by the end of March 2015 to expand the boundaries of its continental Arctic shelf by 1.2 million square kilometres.

The ECHR has rejected Russia’s appeal over a ruling that it must pay €1.9 billion in damages to shareholders of defunct oil giant Yukos. A German court has ordered an autopsy on German lawmaker Andreas Schockenhoff in order to rule out any ties between his sudden death and his outspoken criticism of Russia.  Film director and activist Aleksei Simonov has been awarded the International Association of Press Clubs’ Freedom of Speech Award for his work with the Glasnost Defense Foundation.