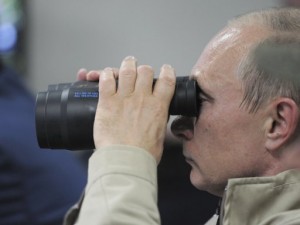 Following the ouster of opposition Deputy Gennady Gudkov, the State Duma says it will investigate other reports of lawmakers pursuing illegal business interests regardless of their affiliations.  A new Duma committee to oversee mass media is currently being formed.  According to state media, North Korea has signed a deal with Russia to readjust its outstanding debts (estimated at $11 billion), although no details have been disclosed.  Overseeing military exercises in the Caucasus mountain region, President Vladimir Putin said that ‘the use of force is increasing in international affairs,’ and that, as such, the Russian military needs to improve its defences and ‘keep [its] powder dry‘.  Deputy Prime Minister Dmitry Rogozin supports this view in an interview published today, in which he praises current plants to invest in the military and says that the state should retain control over arms exporter Rosoboroneksport for the next three to four years.

Following yesterday’s announcement, investor interest in the sale of a $5 billion stake in Sberbank is ‘strong’, in what many are calling a perfectly-timed move.  The sale has been delayed for over a year, and is the Kremlin’s first major asset sale since its 10% VTB stake sale over a year and a half ago.  Telecoms company MegaFon’s Moscow and London IPOs will go ahead ‘within weeks’, with analysts currently estimating that they will raise $3 billion.  Thanks to Vladimir Putin, Russian companies (including Rosneft) are paying their highest dividends since 2009, making analysts optimistic about market reforms.

Pop singer Madonna is being sued for $10 million in a court in St Petersburg by nine antigay activists who say her open support of homosexuality during her August concert broke local laws.  The Orthodox Church is winning a battle against proposed legislature that would end its free use of state-owned land.  Sergei Mavrodi, creator of the MMM pyramid schemes, has created a political party which, he says, aims to cause a ‘financial apocalypse’.