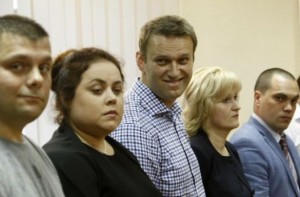 A court in Kirov has found opposition figurehead Alexei Navalny guilty of embezzling 16 million rubles from Kirov regional state-run unitary enterprise Kirovles and sentenced him to five years in jail.  The indefatigable Putin critic, who has registered as a candidate for the Moscow mayoral election, will have ten days to file an appeal.  If the appeal is revoked before September 8, he will be barred from running in the election.  Reports like this indicate that most people will not have been surprised by the outcome, which has been described as an act of political persecution from the outset, a supposition supported by the fact that 33 of the 35 witnesses called by the prosecution gave testimony that confirmed Navalny’s version of events.  Analyst Lilia Shvetsova has called Navalny ‘a new Russian Mandela‘ and comparisons with the Khodorkovsky case abound.  ‘But if the Khodorkovsky trial a decade ago underscored how Putin and his team were confident and rising, the Navalny case — and the one against the Bolotnaya protesters — reeks of desperation‘.  Ria-Novosti interviews Navalny’s co-defendant, Pyotr Ofitserov, the businessman who is accused of participating in the fraud scheme Navalny allegedly created and who has refused to testify against him.

Conflicting reports on the authenticity of the new Pussy Riot video has this analyst discussing a possible rift within the anti-Putin punk collective.  Whilst Vladimir Putin has indicated that he would not wish to hurt ties with the U.S. over Edward Snowden, he has also asserted that ‘we are an independent country and we have an independent foreign policy and we will carry it out.’   Moscow is hoping to secure a $350 million defense contract with India to sell 100 units of self-propelled howitzer guns.  Facing a shaky investment scenario amongst other woes, it has been reported that economic growth in Russia is stumbling to ‘the weakest pace since a 2009 contraction’.  Could Central Bank First Deputy Chairman Sergei Shvetsovs’s real estate declarations prove an embarrassment for Putin’s attempts to suppress foreign asset ownership in the elite?

A new article in Esquire has found that Russia is a world leader in web surfing, cyber attacks, plane crashes, traffic jams and consumption of vodka.