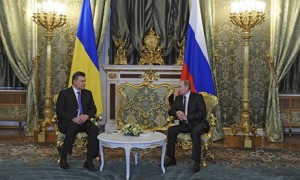 Yesterday’s much-anticipated meeting between Vladimir Putin and his Ukrainian counterpart Viktor Yanukovych has yielded pledges that the Kremlin will buy $15 billion worth of Ukrainian government bonds, which should be enough to ‘plug the black hole in Ukraine’s balance of payments’ for about 18 months.  Furthermore, it has been agreed that Moscow will slash the price of natural gas by 30% to $268.50 for 1,000 cubic meters.  President Putin asserted that ‘energetic steps’ should be taken in terms of bilateral cooperation, ‘not only to return to the levels of recent years but to go further‘; a nightmare scenario for Ukraine’s opposition leaders.  The U.S. fears that the new deal does not address the concerns of protestors.  Senator John McCain, who has been active in the Kiev demonstrations, gives his views here.  Germany’s new Foreign Minister Frank-Walter Steinmeier used his inaugural speech to criticise Moscow for exploiting the economic weakness of Ukraine for political leverage.  Foreign Minister Sergei Lavrov has said he is surprised at the ‘blatant pressure‘ he believes the EU is putting on Ukraine.

In a sign to the U.S. that Russia is upgrading its nuclear arsenal, it will apparently begin deploying a new kind of long-range missile in 2018.  It has been announced that Barack Obama and Joe Biden will not attend the Sochi Olympics, in what many see as a protest against Russia’s gay propaganda law.  The fact that two openly gay sports icons will be included in the U.S.’ delegation to the Games has also been taken as a pointed gesture.  The lawyer of Pussy Riot members Nadezhda Tolokonnikova and Maria Alekhina has said that a new amnesty law would see his clients freed since it has been extended to incorporate ‘hooligans’.  This means that the Arctic 30 could also be released.

The Kremlin has revised its recent proposition to ban all salmon imports from Norway, which relies heavily upon the Russian market.  Landor’s Russian Consumer Report 2014 has found that despite a reputation for flashing the cash, many Russian consumers are ‘no longer enthralled by luxury products‘.