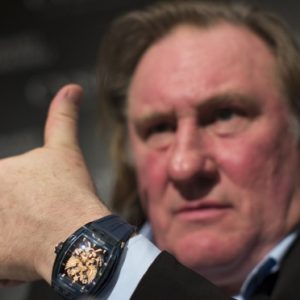 Following the lows of ‘Black Tuesday’ the ruble has stabilised somewhat, finding itself was around 9% firmer against the dollar in volatile trading.  The slight recovery has been attributed to the Finance Ministry’s decision to sell foreign currency and an agreement between the government, Central Bank officials and Russian firms to make sure their foreign currency assets were back at the October levels by March 1.  News of the stabilisation will provide a welcome backdrop to President Putin’s hotly-anticipated end-of-year news conference, due to take place today.  But are the economic woes actually abating?  ‘This crisis is just developing,’ says the Guardian’s Nils Pratley.  The salient difference between Russia’s crisis and other countries’ is, according to one commentator, that in other instances ‘market participants would be counting down the days until the IMF was called in. The twist here is that it is almost impossible to imagine Vladimir Putin begging Washington to come to his aid’.  A piece from Bloomberg concurs that a rescue package is not on the cards.  Meanwhile the European Union’s foreign policy Federica Mogherini has indicated there are signs of ‘some willingness‘ from Russia to resolve the crisis in Ukraine’s pro-separatist eastern territories.  Foreign Minister Sergei Lavrov has denied Russia has any plans to annex the aforementioned territories, stating, ‘it’s for Ukrainians to decide’.  OSCE monitors have registered no use of heavy armaments near Donetsk since Monday.

As a result of the ruble’s decline, Russia’s 20 richest citizens lost $10 billion in the first half of this week.  Consumers are finding some products restricted as companies such as Apple suspend online sales in order to review pricing.  Currency exchange desks are finding themselves clean out of U.S. dollars and euros.  Oil giant Rosneft, which has denied accusations that the money it has raised from bonds is being converted into dollars to meet debt repayments, should be able to pay back a $7.6 billion portion of a bridge loan that matures on Sunday.  The chemical, steel and timber industries, along with the tourist sector, are reportedly likely to benefit from the ruble’s current woes.  Just as well for tourist hubs like Sochi, which the Guardian’s Shaun Walker describes as a ‘ghost town‘ since its stint as Olympic host town.

An autopsy has found no signs of foul play in the death of Putin-critical German lawmaker Andreas Schockenhoff.  Khasan Zakayev, one of the organizers of the 2002 Nord Ost theatre siege, has finally been arrested in Moscow, after 12 years on the run.  Rights group Memorial has received another temporary reprieve.  The authorities have freed billionaire Vladimir Yevtushenkov from house arrest less than two months after seizing and nationalising a stake he owned in oil company Bashneft.  Former Prime Minister turned Putin-foe Mikhail Kasyanov has warned that the crisis may galvanise Russia’s protest movement.  The Kremlin meanwhile seems to be feeling clement towards corruption; introducing a bill to decrease fines for small-scale graft — ‘because nobody pays them’.

PHOTO: Gérard Depardieu during a presentation of watches by CVSTOS, a Swiss luxury watch brand from the line ‘Proud to be Russian’. (Alexander Zemlianichenko/AP)