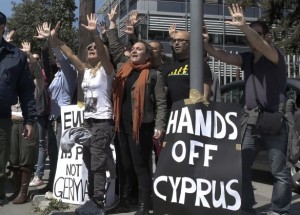 A putative tax on bank deposits in Cyprus as part of an EU bailout deal has been called ‘unfair, unprofessional and dangerous‘ by Vladimir Putin’s spokesman. Russia’s business elite has considerable sums in the island’s institutions; state owned lender VTB alone holds $13.5 billion in deposits there.  Companies owned by Putin’s childhood friend and former judo partner Arkady Rotenberg have apparently been awarded $7.4 billion of contracts for the 2014 Sochi Winter Olympics (which is more than the entire budget of the 2010 Vancouver Games).  A new report released by the Russian Union of Industrialists and Entrepreneurs and Fleishman-Hillard Vanguard has found that foreign companies operating in Russia saw an improvement in the country’s business climate last year.  Industrial output failed to meet forecasts in February after shrinking the most in more than three years.  Morgan Stanley has slashed its 2013 Russian growth forecast to below 3%.  Russia, whose tax breaks for shale and offshore oil will come in to force on January 1 2014, also plans to use hydraulic fracturing combined with horizontal drilling in an attempt to maximize extraction from Soviet-era fields.

To the anger of Russia’s child rights ombudsman Pavel Astakhov, prosecutors in Texas have announced that they will not charge the parents of adopted Russian toddler Max Shatto in connection with his death.  Deputy Foreign Minister Sergei Ryabkov has asserted that Moscow will not change its critical position on Washington’s missile defense plans. Duma Deputy Aleksei Pushkov has gone so far as to say that moving the proposed shield from Europe to Alaska ‘proves‘ that the system is aimed at Russia and not at Iran. ‘At the end of the day, the Kremlin desperately needs U.S. missile defense for propaganda purposes‘.  Find out here why the Sova Center has described 2012 as ‘a contradictory year‘ for hate crimes.  The Kremlin has suggested that the author of a report which claims United Russia actually lost the 2011 elections needs ‘psychiatric help‘.  An article which criticizes the work of three Kremlin-supporting female politicians using a prostitution analogy has pitted freedom of speech defenders against feminists.  Brian Whitmore casts a watchful eye on the political ambitions of Prime Ministerial pretender and current Kremlin chief of staff Sergei Ivanov.

The leader of the Yabloko party has condemned the public burning of his party’s books by Russian Orthodox Christian activist group God’s Will which called the opposition party ‘satanists and perverts’.  The religious activists have also taken their cause to Moscow’s Charles Darwin museum, denouncing the theory of evolution with banners and pamphlets proclaiming, inter alia, that ‘God created kittens!‘